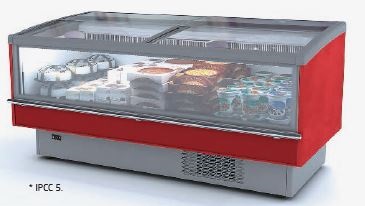 The new Honeywell R-455A refrigerant, a mixture of R-1234yf, R-32 and CO2 marketed under the name of Solstice® L40X, has been perfected to assist the commercial refrigeration sector in complying with the 2022 and beyond F-Gas regulations, by replacing low temperature refrigerants that have high GWP potential, such as R-404A. In fact, from 1st January 2022, the use of refrigerants with a global warming potential (GWP) higher than 150 in hermetically sealed cooling systems in commercial use will be banned.

One of the sectors most affected by this new restriction will be OEMs supplying retail stores and supermarkets with standalone, small charge on-board cabinets, refrigeration condensing units and monoblock systems for cold rooms and freezer rooms.

Studies have shown that this refrigerant provides efficiency gains of 6% or more in LT applications and over 10% for MT, along with a better COP than R-404A. R-455A is categorised A2L by ASHRAE, with an extremely narrow flammability range (1.1% volume in air) which makes it much less flammable than other A2Ls.  Most other options available, based on HFC/HFO mixtures, do not comply with these restrictions on use, since they have a GWP higher than 150.

Moreover, the use of propane in such systems is difficult, due to the restricted charge and its high flammability (A3) - leading to extra costs in manufacture, transport, installation, servicing and disposal, and increased safety risks for end users and servicing companies.  Even though multiple circuit solutions are available for propane units, this adds cost to system design, build and maintenance.

By way of comparison, R-455A is classified as mildly flammable and this reduced risk enables an increased maximum charge size to be used, opening up opportunities for OEMs to enter higher capability markets.

Several large manufacturers of hermetically sealed compressors have already assessed the performance of R-455A over the last 18 months.  During these tests they observed a capability and discharge temperature similar to those of R-404A but with greater efficiency.

The technical properties of R-455A have also proven to be a good alternative to R-410A on rotary and scroll compressors, which operate at higher pressures and need a wider temperature operating range.  Although commercial refrigeration is the main target, it also has potential in a range of industrial segments. For example, R-455A has a lower discharge temperature than all other R-410A replacement products and reaches high condensing temperatures of 80°C without any liquid injection. This potentially opens the way to penetrating the heat pump market for specific uses such as the production of hot water. Honeywell believes that R-455A has the potential to replace not only R-22, R-407C, R-404A and R-290 but also R-410A and R-32 in the long term. 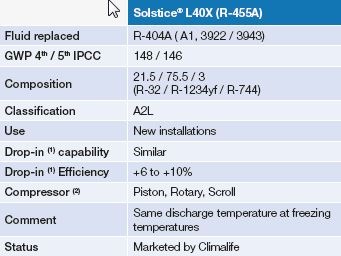 One of the first companies to use R-455A is Frost-Trol, a Spanish company specialising in the design, manufacture and marketing of remote, self-contained refrigerated cabinets in the retail sector. Frost-Trol, known for implementing environmentally friendly solutions, tested R-455A in its Lomond LT island display cabinet with an Embraco VNEK217U compressor and Carel regulator. R-455A (230g charge) was in a unit adapted for propane and achieved a similar capability to R-404A but with higher efficiency ratings. With a GWP of 146* (more than 96% lower than R-404A) R-455A is subject to minimum quota (only the R32 part needs to be accounted for) and does not attract HFC taxes.