Blijham SPAR supermarket in the Netherlands gets a makeover 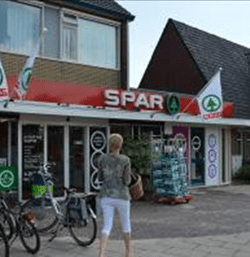 Choosing R-448A : When it comes to choosing a refrigerant, the GWP must take priority to meet the quotas set by F-Gas II.

The village of Blijham lies in the north of the Netherlands close to the German border. Once predominantly supported by agriculture, with many small farms, it is now essentially a commuter village, with its working population travelling to the larger towns and cities nearby, such as Winschoten, Stadskanaal and Groningen. Blijham currently has around 3,000 inhabitants and just one supermarket: the SPAR.

Erik Kort is the store's manager. As well as offering his customers groceries and fresh produce, he also provides a range of other services, such as cash withdrawals, home meal deliveries, prescription dispensing and postal services.

Following the store’s recent refurbishment, when its doors were closed from 4 p.m. on a Saturday to 8 a.m. on the following Wednesday, customers were able to admire the result for themselves. Kort explained: “We stuck to a very precise schedule during the refurbishment, which allowed us to make some major changes in the space of just a few days.” The ceiling system has been completely renovated and now has LED lighting with low-energy bulbs. The store has also been transformed on the outside: as well as its new 3D SPAR logo, the entire frontage has been repainted in the new SPAR colours.

Certain aspects inside the supermarket have also been updated. The meat counter has a completely new look and customers can now go there to buy all their fresh produce. The bakery has also been attached to the meat counter so that both now occupy a central position within the store. Other aspects of the refurbishment have created more space and have made the supermarket brighter, bringing it fully in line with the latest standards. When Mr Kort took over the store in 2015, it had very few customers and both the shop fittings and the refrigeration facilities were out of date.

These facilities consisted of two systems, as well as five separate units that were still using R502 refrigerant. All of these issues gave Mr Kort a sizeable challenge: not only did he want to adapt the refrigeration facilities in his store to meet modern standards, he also wanted to attract new customers.

Thanks to his active involvement, he managed to do just that. By being proactive at both a commercial and a technical level, he was able to move his business forward. The refrigeration issue was addressed in collaboration with the SPAR Group. All of the chiller cabinets are now supplied by a single condensing unit and have a centralised temperature recording system.

The SPAR Group had been using R-407F (Performax LT) for a long time, but in light of the regulations on fluorinated greenhouse gases (F-Gas II) and the corresponding quotas, it took the decision to switch to R-448A (Solstice® N40) hich has a lower GWP and offers excellent levels of performance.  Wieman Koel- en klimaattechniek, a company based in De Meern, was responsible for installing the new facilities.

The condensing unit has a cooling capacity of 18.6 kW for refrigeration and 3.8 kW for freezing. It consists of three Bitzer compressors with frequency converters, two for above-zero and one for sub-zero temperatures, serving the freezer units and cabinets. The new facilities have significantly reduced the store’s energy bills. But the savings don't stop there: a heat recovery system (a common component of a CO2 installation) has also been fitted. Given the major investment that a CO2 installation represents, R-448A (Solstice® N40), was chosen for this project to make the equipment more economical.

With Pieter van Geffen of Wieman Koel- en klimaattechniek at the helm, the store was transformed and the refrigeration system fitted in less than a week. Despite its relatively low cooling capacity, the store has all the space it needs with a new 13-metre-long chiller cabinet along one of its walls, containing refrigerated and packaged products. Pre-packed meats are displayed in a 6-metre cascade cabinet. The store also has a five-door freezer and a refrigerated counter for cooked meats and cheeses.

The condensing unit also keeps two chillers and a freezer at low temperature.