How does the COFRA cooperative optimise its cold production and fruit preservation in an efficient and sustainable way?

Quercy Refrigeration, a specialist in industrial refrigeration for arboriculture, offers an eco-responsible solution with an energy saving of 25 %.

It was in the heart of the Lot and Garonne valleys of France, on alluvial land, that COFRA was established in 1961. This fruit cooperative, made up of 17 members, stores and preserves about fifteen varieties of apples, some pears and prunes from August to July, without overshadowing the calibration, packaging and sales activity for certain customers in the supermarket and wholesale sectors. In spring and summer, cold rooms can be rented to store strawberries, aubergines and courgettes. This SME has a turnover of 4 million euros and employs 24 full-time staff. Its medium and long-term vision is to get as much freedom as possible from their needs by promoting the circular economy and sustainable development.

Cooling, a vital resource for the company

Built on 10 hectares of land, the COFRA building with a surface area of 20,000 m² has been a huge "fridge" since its origin. Partitioned off over the years to meet the needs of the market and to accommodate new varieties of apples such as Pink Lady, Gala and Chanteclerc, today the warehouse has 57 cold rooms, almost half of which are dedicated to the organic apple market during the season. 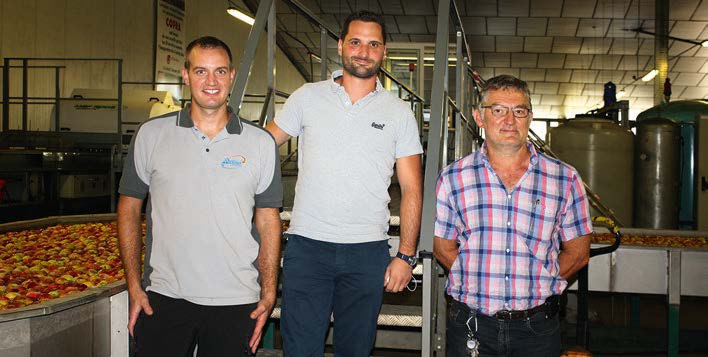 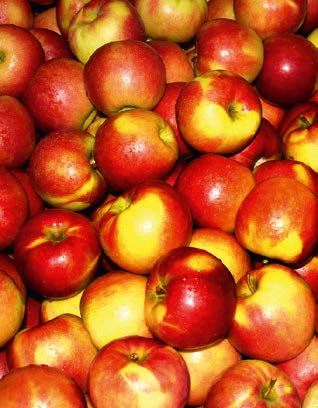 For short term storage, normal cold storage is preferred. For longer periods, storage in a controlled atmosphere is the chosen solution.

It goes without saying that cooling is essential to guarantee their services to the region's agricultural stakeholders, who trust them completely to store their crops and preserve them in the best possible way.

« We can't afford to be without cooling at any time, without cooling I have no business. It's in our interest to know how it works » emphasises Emile Nioche, a technical enthusiast in addition to his management duties.

A full-time refrigeration technician is employed to monitor the refrigeration installations and carry out daily maintenance work on all technical equipment. A so-called indirect refrigeration system has been in place on site since the 2000s. It consists of four ammonia chillers with a unitary cooling capacity of 300 kW, which feed a glycol water loop at -7°C to cool all the cold rooms and the shipping docks. A cooling tower is used to condense the ammonia.

Solar energy has been one of the first initiatives implemented with the installation of photovoltaic panels on the entire roof followed by the project to shade employee vehicles. And soon the aim is to purchase a solar power plant to produce 10% of its own energy.

Self-consumption is a recurring theme given that 3 million KWh per year is required for COFRA to operate. Thinking ahead to future generations also means leaving a suitable and less energy consuming cold production system in place.  With the increase in outside temperatures in recent years, « the  refrigeration plant had to work harder in summer to meet these needs and thus had to be rebooted » explaiins Emile Nioche. The project for a new investment was launched at the end of 2018 to solve this problem, without forgetting the removal of the cooling tower which was restrictive in terms of maintenance and regulatory controls. COFRA called on Quercy Réfrigération, a company recognised in the world of arboriculture for its know-how and its HD-Cold system.

The apple gets an eco-responsible refrigeration system

Preserving fruit for a long period of time without adding chemicals or losing weight is a phrase used by Benoît Duparc, manager of Quercy Réfrigération, a dynamic company that is very successful in France and abroad. To meet COFRA’s specifications, a global solution was implemented in the spring of 2020 based on four pillars :

• HD Cold : the integrated control system that does not require a humidification process. It allows you to optimise the hygrometry and completely dispense with defrosting in cold rooms under normal or controlled atmosphere. The NATURE HDCOLD evaporators, developed by the manufacturer Stefani, following Benoît Duparc's specifications, work with fan motors (blow throw EC fan) improving air distribution and humidity control. This patented solution meets ecological requirements and allows up to 40% energy savings, 30% less water usage and a reduction in fruit and vegetable losses.

• 4 chillers with R-1234ze to replace those with ammonia and to get rid of the cooling tower. Solstice® ze refrigerant has many advantages: a long-term solution with a GWP of less than 1 (outside of F-Gas quotas) classified in group 2 of the DESP according to EN 378, simple implementation for technicians with low pressures, a very good coefficient of performance (see study on page 5) and energy savings of around 25% compared to ammonia, the absence of administrative declarations for the end user with its "non-toxic" classification, an economically advantageous investment and maintenance cost.

• Regandsy & Hates : a new process for improving condensation (see below).

• Heat recovery process using a system of plate exchangers to preheat water (less natural gas consumption), defrost, heat the building and power the thermotherapy process to prevent mould growth in certain varieties of apples before storing them in cold rooms.

After a few months of service, the results are impressive. The €2 million investment, largely financed by the energy saving certificates, allows COFRA to innovate sustainably and look to the future with greater peace of mind by mastering the refrigeration technology implemented and control it easily thanks to the connected tools set up in parallel. 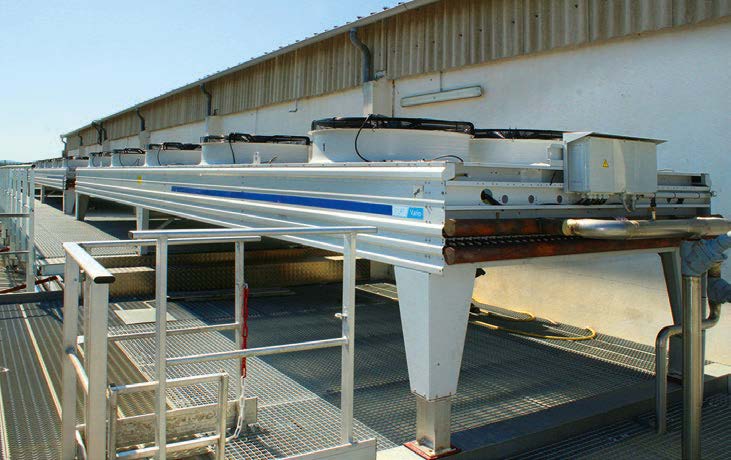 The Regandsy & Hates system, developed by RH2i, supports the management of condensation with a water loop that is charged with calories during the day and discharged during the night at the most advantageous time by the Hates system. This water is stored in two series of insulated tarpaulins each 125 m3. Regandsy, based on the outdoor temperature and the time when the heat load is to be achieved, lowers the condensing temperature in warmer periods and allows the condenser fan speed to be reduced by 15-35%.

« Improving condensation is part of a sustainable development approach.  It is a determining factor in controlling electricity consumption and the quality of the cooling. The Regandsy & Hates innovation is at the heart of this approach, which allows us to optimise refrigeration efficiency » concludes Jean-François Sailhan, Director of RH2i. 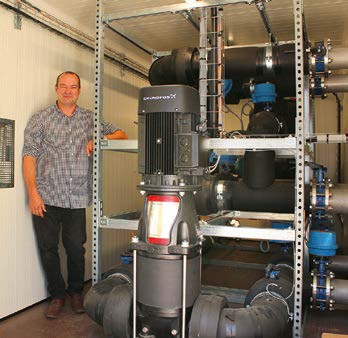 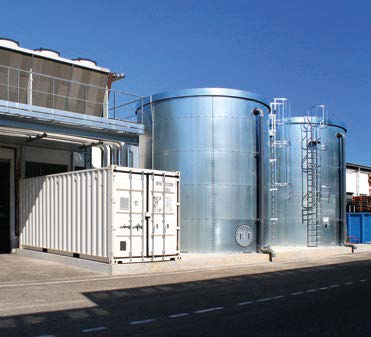 Would you like to find out more? Read our performance study on R-1234ze vs Ammonia chillers.