The Liège Olympic ice rink is part of the Médiacité complex. It is a sports arena with an area of 1,800 m² built in 2012 by the city. It has a changing room with 1,100 pairs of quality skates stored in heated lockers. The stands have heated seats for up to 1,250 spectators. 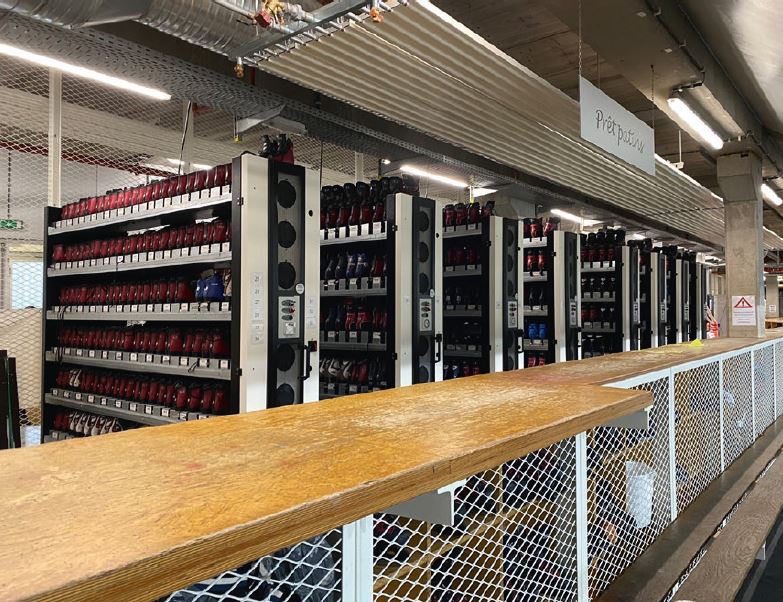 The Liège Olympic ice rink is part of the Médiacité complex. It is a sports arena with an area of 1,800 m² built in 2012 by the city. It has a changing room with 1,100 pairs of quality skates stored in heated lockers. The stands have heated seats for up to 1,250 spectators.Throughout the year, the rink organises national and international ice hockey competitions, entertainment, theme evenings and sound and light shows. But it is also a great place for skating enthusiasts where young and old, with family or friends, meet to skate in a friendly atmosphere. To ensure quality ice for each of these activities, careful temperature management is required.

During the construction of the ice rink, an indirect system was installed to ensure the cooling of the slab and the ice. The primary circuit of the installation is charged with 180 kg of ammonia and the secondary network contains 13 tonnes of alkali, an aqueous solution based on ammonia.

The ice rink consists of three layers: the pipes, a concrete layer and the ice. The technical installation is located in the basement of the building.

In the context of sustainable development, the company VMA in charge of maintenance proposed to change the heat transfer fl uid to a bio-sourced alternative to meet the expectations of the city of Liège.

VMA Réfrigération, a subsidiary of the Civil Engineering contractor CFE, has been present on the Belgian market for 120 years. VMA has more than 30 years of experience WMA Réfrigérationand the city of Liège choose Climalife’s bio-sourced 1,3-propanediol heat transfer fluid to replace the Alkali. In industrial refrigeration and supports its customers from the project study to the maintenance by optimising energy effi ciency. It works on multidisciplinary projects (electrical engineering, HVAC, refrigeration, energy flow management, energy savings, etc.) and employs 1,000 people.

The objective was to find a suitable secondary fluid: “The city did not want to change the architecture of the existing refrigeration plant, but only to replace the alkali with another heat transfer fluid that was compatible with the system in place and that was environmentally friendly,” explains Abdel Lourhmati, industrial refrigeration expert at VMA.

Thierry Pierre Put, sales representative at Climalife, was consulted by VMA and proposed the two plant-based solutions: Thermera and Greenway® Neo N. The comparison and analysis of the properties of each solution revealed that Greenway® Neo N has a better density and was more suitable for this application. This heat transfer fl uid, formulated and produced by Climalife, is also chosen for its advantages in terms of reducing the carbon footprint and safety.

Another of its characteristics is its biodegradability. In the event of a leak, the risk of soil contamination is reduced.

To drain the alkali and charge the system with Greenway® Neo N, three crucial steps were carried out in succession on Sundays, when the sports centre is closed. 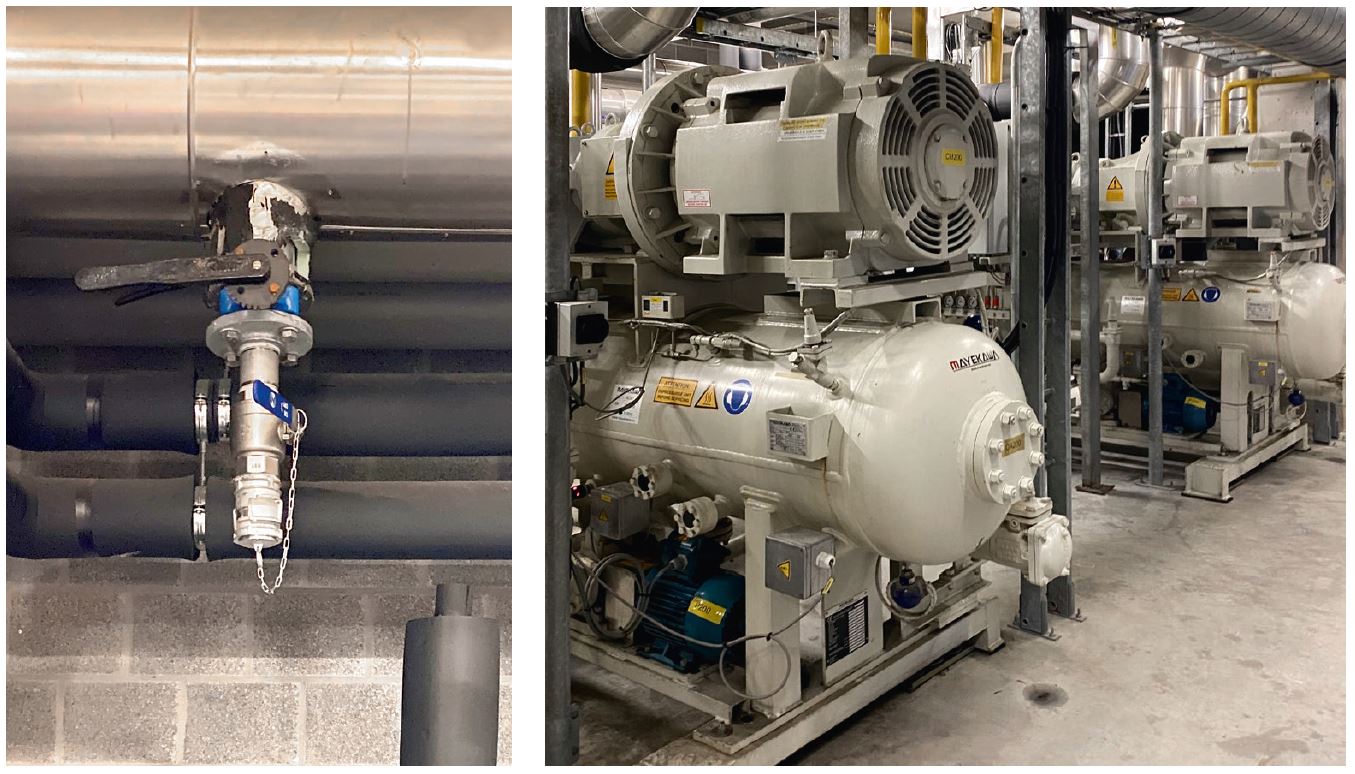 Beforehand, a safety analysis was carried out jointly with the project manager and the services involved for pumping the 13 tonnes of alkali. An additional valve was added to the system to facilitate operation.

VMA called on a specialised company to provide a tanker truck to recover the alkali. Long pipes were laid to reach the facility at the bottom of the car park. The truck was equipped with a large air filter, coupled with a ventilated water tank to relieve excess pressure and facilitate pumping. Two large tanks of a thousand litres of water were used to neutralise ammonia vapours during transfer. All precautions were taken to avoid any risk of off-gassing in Liège city centre. This type of work required a high level of expertise in ammonia and a full control of the hydraulic systems. Once the alkali had been recovered, it was destroyed in a special centre and the truck was cleaned with water..

The second step was to flush the system and the pipes completely.

Finally, 11,000 litres of Greenway® Neo N for antifreeze protection at -25 °C were loaded into the network and “this last stage went well, it took a full day to fill the system, three days to set it up and about two weeks to reach the desired temperature”, says Pascal Michot, Industrial After Sales Project Engineer at VMA Réfrigération. 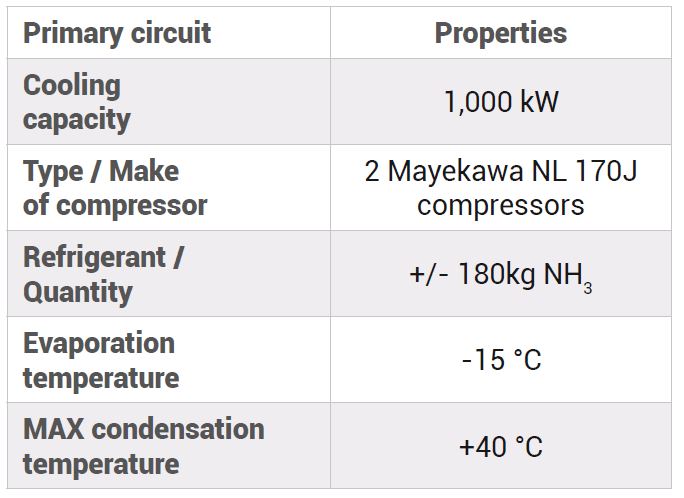 After only a few months in action, the results are excellent.

Greenway® Neo N is compatible with the original cooling system.

There was also a slight increase in pumping energy but this was very marginal. The advantages of the Greenway® Neo N remain the most important, namely safety and the ecological solution to which the city of Liège attaches great importance.

VMA Réfrigération will continue to maintain the facility on a regular basis to ensure that hockey players and skaters can fully enjoy the Olympic rink. At the same time, the company will also be involved in managing the heat recovery system set up to heat the car park, the premises and the snow pit. 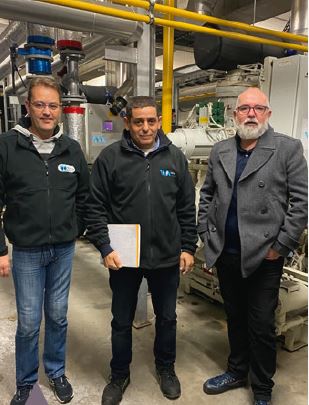