Established in June 1989, the Cuisine Centrale de Saint-Brieuc was designed to deliver up to 3,000 meals per day. The kitchen's main mission is to provide meals for public primary school canteens in the town of Saint-Brieuc (~2,500 meals/day) using a cook-freeze method. Over the years, the Cuisine Centrale added home delivery of meals to the elderly and some canteens for adults. The Cuisine then diversified by establish­ing hot food delivery for meals at childcare centres, which require special procedures. The site has a team of 24 people working Monday to Friday. 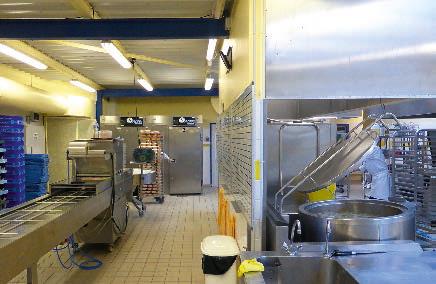 Using the cook-freeze production method makes it pos­sible for them to prepare meals for several different customers for different delivery days. Meals are cooked and put in trays, then cooled to 7°C before being stored in a cold room where they are kept until they are distributed no more than three days later.

The hot delivery system makes it possible to adapt to the needs of little ones by cooking and delivering specific meals with varying textures every morning. The system also makes it possible to make the last-minute meal changes if needed. The Cuisine Centrale de Saint-Brieuc delivers meals to around thirty food service locations every day. Since 2009, organic products have been included in the prepa­ration of meals and currently make up about 16% of all the orders.

At the helm of Central Froid is Mickael Rouxel. He has been aware of environmental issues since the start of his career in Switzerland. He has a comprehensive understanding of the energy efficiency of an installation—from its design, to its operation, to its maintenance. Mr Rouxel proactively tracks developments in the refrigerant world, which allows him to constantly innovate and offer long-term solutions.

Use of the innovative combination of R-1234ze and R-455A is proof of his commitment. It got the attention of the Cuisine Centrale de Saint-Brieuc, which had a heat transfer system installed that combines energy performance with sustainability.

Energy saving: a key factor in the decision to replace the heat transfer system

The kitchen decided to replace their original refrig­eration systems, which had become outdated and difficult to keep in service, requiring several fluorine refrigerants for separate pieces of equipment.

According to Mr Loriferne, ‘The change to a comprehensive refrigeration unit for cooling needs was a clear choice and, in order to save energy, it was essential that we put in place a process to recover heat to produce hot water and heat the building. CETIA Ingénierie, produced Energy and Refrigeration Usage Assessment at the begin­ning of the project.

An above-zero refrigeration unit using R-134a and a sub-zero unit using R-407F were chosen to cover all needs. The project specifications, with a total budget of 80,000 euros, was brought before the town hall's tenders commission by the project team.

The focus of this project was energy saving and return of investment. The call for tenders was published in late 2016 and attracted several refrigeration companies. Central Froid stood out with their environmental and technical approach, using the latest HFO refrigerants with lower GWP, and was awarded the project.

Implementation began in March 2017 with instal­lation of an HK Refrigeration sub-zero refrigeration unit with a Copeland scroll compressor, adapted by Central Froid to work with R-455A. This refrigerant, with a GWP of 146 on the IPCC AR5 scale, is sold by Honeywell under the brand name Solstice® L40X. Mickael Rouxel was relying on technical support from Climalife in the process of getting approval from compressor and part manufacturers for this project. The refrigeration unit cools the sub-zero cold room to -20°C for frozen products.

The project continued in April with installation of the above-zero refriger­ation unit, which required special scheduling to not disrupt the production. ‘Scheduling the switch over two days, getting one cold room online at a time, allowed us to avoid the storage problem that we would have had with other installers, who wanted to switch over four cold rooms simultaneously. The special schedule was an important advantage for us,’ said Jean-Luc Pennec.

The two units are installed outside, near the plant room that held the old refrigeration units. The old units were dismantled and the freed-up space was used to install the Boostherm heat recovery system that relies on the refrigeration units’ condensers. The recovered energy is used to pre-heat hot water to 55°C, with 45°C water flowing out to three 1,500-litre tanks. The hot water that goes out for usage is heated to 60°C. The building's electric resistance heating system was replaced with the France Air AHU using heat recovery from the above-zero refrigeration unit charged with R-1234ze.

“‘With the arrival of new HFO molecules and the impact of quotas on the market, it is extremely important to move towards solutions with very low GWP, like R-1234ze and R-455A, to ensure that equipment can be used in the long term and that the required refrigerants will be available. Doing so allows you to work with refrigerants while keeping peace of mind,’ said Pierre-Emmanuel Danet, Technical Support Manager at Climalife. 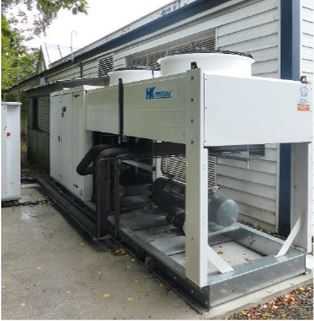