The DNI : a strategic investment for energy management

What is the Smart Level Sensor? How does it measure energy consumption and manage thermodynamic installations ?

How did the DNI come about ?

M. L. : Mr. Gérald Anquetil, founder of Matelex, has spent his whole career working in the refrigeration industry. When F-GAS I first appeared, he realised that there was no real leak detection solution, despite the regulations requiring a reduction in emissions. Aware of the high leakage rate in refrigeration installations and wishing to support operators and installation owners in reducing their environmental impact, he chose to use his experience in the refrigeration sector and his knowledge of refrigeration engineer expectations to create the DNI: Smart Level Sensor. Since then, the DNI has continuously evolved thanks to feedback from the field, in order to reduce direct and indirect greenhouse gas emissions.

F. W. : The first steps of the process began in 2008 and the system was patented in 2009. The first DNIs produced were then installed in 2011. They have since undergone continuous improvement, including connectivity enhancements that connect to the Sentinelle online user interface.

In October 2017, under the leadership of Christophe Morote (Climalife France Activity Director), Matelex joined the Dehon Group with the aim of increasing its larger-scale development. New production capacities were set up to meet growing demand in France and other countries. Production has moved back to France with all equipment 100% French manufactured.

Who were the first customers to buy into the product ?

In what way is it a product that promotes energy efficiency ?

F. W. : The DNI has an impact on two types of emissions: direct (i.e. leaks), and indirect (in terms of energy consumption). Regarding the energy aspect, the DNI works on two levels. Firstly, the DNI monitors, in real time, the level of ﬂuid in the liquid receiver to ensure the quantities are sufficient. An undercharged installation consumes more energy. Secondly, there are two add-on modules devoted to energy use that also make it possible to reduce the electricity consumption of a refrigeration system. 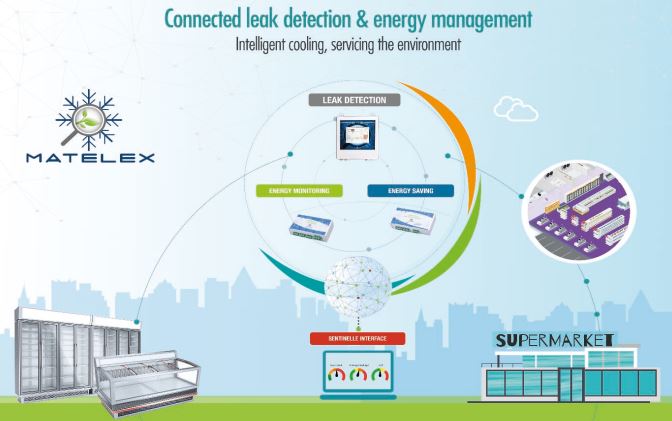 The energy module calculates the actual COP, taking into account the consumption of the compressor(s) and the condenser fans. It can also monitor the consumption of the pumps used for indirect circuits. It allows the enthalpy cycle to be traced in real time. This data, coupled with the analytical tools available on the Sentinelle interface (eg compressor starting frequency), allows the DNI to issue warnings about energy deviations and also identify inconsistent data that can improve system performance.
The ﬂoating HP module allows the high pressure setting to be adjusted according to the outside temperature, in order to alter the speed of the condenser fans.

The objective is to reduce the energy consumption of an installation by 15-20%. This module is also eligible for CEE incentives (Energy Saving Certificates) in France.

What kind of improvements can we expect in the near future ?

M. L. : Since the acquisition by the Dehon Group, Matelex development has been driven by the desire to meet the growing needs of the market by leveraging the group's global presence. This fits with the Dehon Group’s commitment to developing solutions that help reduce the environmental impact of refrigeration installations. This commitment includes ﬂuid substitution, leak detection and installation energy management.

Today we are continuing to develop the DNI and its modules and we also benefit from feedback from our customers. A major player in the supermarket sector of France, for example, has achieved a 70% reduction in leaks over the last 3 years by installing the DNI on all of its installations. Beyond using leak detection to reduce refrigerant usage for HFC installations, resulting in cost savings, we are moving towards a global solution for optimising installations with CO2.  For example, although the cost of the ﬂuid is lower, real-time monitoring and alerts make it possible to improve installation performance, avoid breakdowns and thus minimise the risk of operating losses, which can be very costly.

In a nutshell, what is the advantage of leak detection using an indirect method compared to a direct method ?

F. W. : The indirect method makes it possible to meet regulatory obligations for installations containing quantities greater than or equal to 500 tCO 2 eq. ("F-Gas" EU Regulation No. 517/2014).
The method also makes it possible to halve the frequency of manual leak detection saving time and cost because the leak detection can be quite time consuming. With direct detection, one leak can conceal another this may mean waiting for the next manual leak detection schedule or if bad enough may cause a system failure due to refrigerant loss. With the DNI, a quick recalculation allows you to be notified of a second possible leak.

Devices such as the DNI that alert the operator in the event of a leak make it possible to react very quickly, with information on the leak rate and the potential loss to hand. 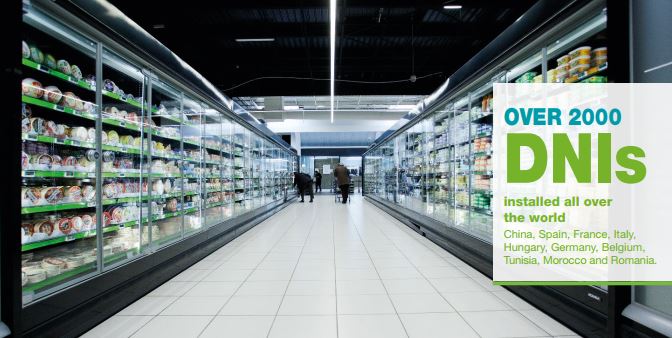