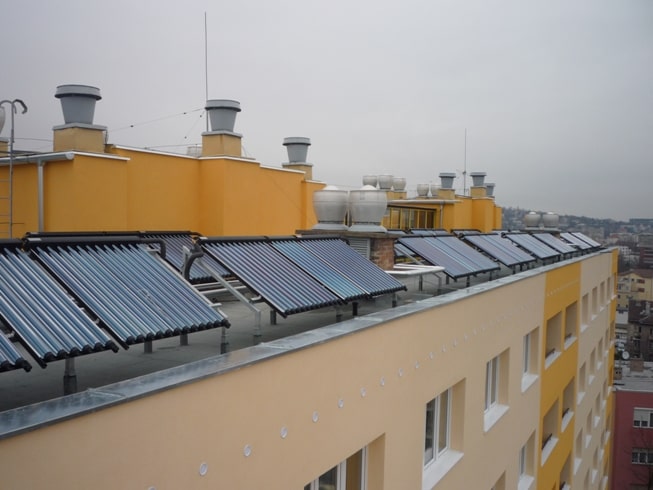 The Hungarian government has launched various calls for tender for the renovation of residential buildings built with energy-saving industrial technologies.  Within this framework, the Hungarian authorities are encouraging the installation of infrastructures to renovate and modernise systems and equipment designed to increase renewable energy use in residential buildings.

An 180-unit apartment block located in the 11th district of Budapest received a government subsidiary in 2011 for the external insulation of the building, the replacement of its windows and the conversion of the domestic hot water system frm district heating to solar.

An order for tubular thermal solar collectors was placed with Solar Trade Kft.  This company, created in 2005, specialises in the manufacture, design, application and installation of systems utilising renewable energy, as well as consulting services in the field.  It is a company committed to the deployment of heating and cooling systems that are economical, environmentally friendly and energy-efficient.  Its Director, Laszlo Garaguly, found out about Greenway® Neo Solar through Klenk Energetikai Kft, a company based in Bekescsaba that had been very satisfied with this solution in its old and new solar circuits.  Consequently, they contacted the sales representative at Climalife, a supplier of innovative and sustainable solutions for climate control systems.

At temperatures above 150°C, Greenway® Neo Solar degrades 4 times slower that a conventional solution based on monopropylene glycol, which enables a dramatic reduction in corrosion and "tarring", while avoiding the risk of the collectors becoming clogged.  At 100°C, it expands half as much and its technical properties remain stable.  It requires less energy to pump due to its low viscosity.

Because of its numerous advantages, systems that have adopted Greenway® Neo Solar react better to overheating, displaying greater resistance.  The systems have a longer life span and are efficient in the long term, yielding a good return on investment.  Convinved by its qualities, the company Solartrade Kft then came out in favour of Greenway® Neo Solar.

The monopropylene glycol antifreeze previously used in such systems was replaced, as it was observed that the acid concentration of this fluid increased at high stagnation temperatures, with the circuit beginning to "tar". The second reason for its replacement is the fact that in sunny winter conditions, monopropylene glycol may turn into sludge, which makes it difficult to prime the pump and increases energy consumption.  No such changes are observed with Greenway® Neo Solar; the properties of this heat transfer fluid make regulation and adjustment easy.

An essential characteristic of the product, linked to the company's commitment to the environment, lies in the fact that Greenway® Neo Solar is a 100% renewable plant-based substance, which makes it possible to significantly reduce users' carbon footprint.  In two hours, the 600 litres of heat transfer fluid were transferred by pump into the evacuated tubular thermal solar collectors (type: TZ 12CPC).  These collectors, with a total surface area of 123m2, were installed on the roof of the 10-storey building.  Buffer tanks with capacities of 1 and 2 m3 were installed in the basement.  There are three 2 m3 tanks for hot water and 1 m3 tank for drinking water.  The system is regulated so that temperatures never exceed 95C in the tanks and 50C in the up pipes. 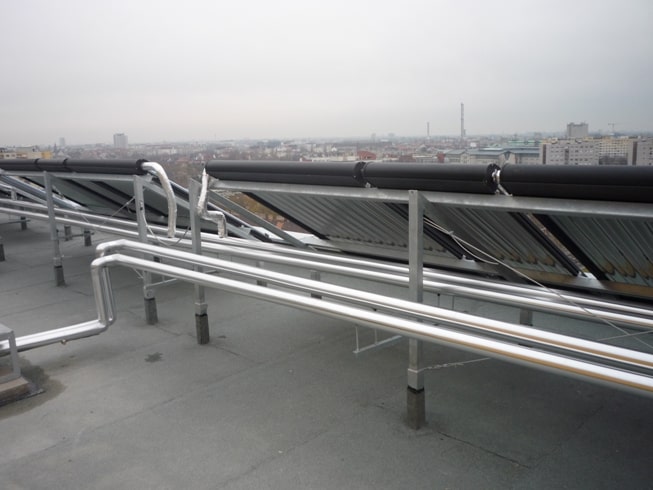 The building was approved in December 2011 and since then, energy-saving and efficiency measurements have been taken regularly.  The system has produced 62 MWh of energy in approximately 5 months, to the satisfaction of the residents.