In 2016, conscious of issues of gwp and the availability of r-404a, black koudetechniek decided to begin recommending sosltice® n40 for all of the new refrigeration projects.

Working in the Netherlands and Belgium, Black Koudetechniek specialises in designing, supplying, installing, repairing, and maintaining refrigeration equipment, such as cooling systems, cold production and storage room units, ice machines, and tunnel freezers. Their main customers are food production and packing industries, hospitality wholesale and retail industries, to name a few.
Since the implementation of the F-gas regulation and the launches of new HFC and HFO solutions on the market, Black Koudetechniek has chosen R-448A as a replacement for R-404A in all of the company's new projects. For existing systems, a policy of retrofitting can be more difficult to implement as it depends primarily on the end users. 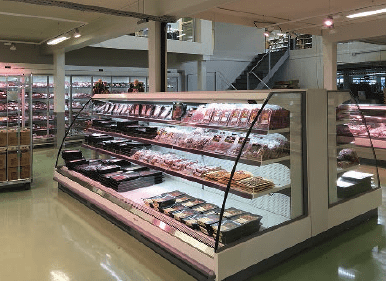 Example of a project completed for the wholesaler HANOS, based in Utrecht.
HANOS - ISPC is a wholesale company specializing in the HORECA sector offering full range of products and services. They have the total of 19 establishments in Netherlands and Belgium. Black Koudetechniek is managing maintenance in a number of those establishments, including Hanos Utrecht. HANOS Utrecht opened its doors in 2009 with a 6,000-m² store and used refrigeration equipment taken from another HANOS site. 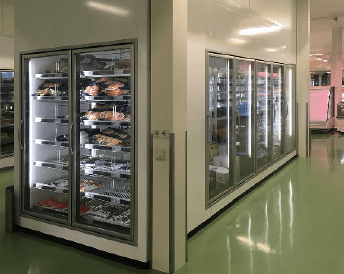 In 2016, the store added another 4,000 m² of sales space for fresh foods and non-grocery items. Black Koudetechniek was in charge of the refrigeration part of the project. The goal was not only to install a new condensing unit using R-448A for freezers and an R-134a unit for above-zero refrigeration, but also to install new Viessman refrigerated cases and to connect old cooling systems to the new system. Implementation took place over the period of six-month from April to October 2016 and was managed by two technicians.

The R-448A unit consists of two Bitzer 6GE60Y compressors with variable speed drives. They have a cooling capacity of 54 kW, with an evaporating temperature of -30°C and a condensing temperature of +45°C. An optimised Danfoss ADAP-KOOL system is used to control and monitor the refrigeration equipment, as was the case for the previous refrigeration units. The Danfoss system facilitated installation of the new equipment, with the new R-448A settings incorporated.

Solstice® N40 is similar to R-404A, but is more environmentally friendly. HANOS is very satisfied with the performance results ‘HANOS isn't concerned with the technical aspects. They just want the temperature to be perfect,’ says Thomas Gerritsen.

«At Black Koudetechniek, we believe in anticipating the future and providing the right equipment for each project. Solstice® N40 (R-448A) has the following advantages: it has a good coefficient of performance; of all the non flammable R-404A replacements on the market, it has the lowest GWP; and it helps reduce energy consumption. Why wait until 2020? We inform our customers about the issues with R-404A and we always recommend Solstice® N40 because it works perfectly for our applications and it is employed in exactly the same way as R-404A.»