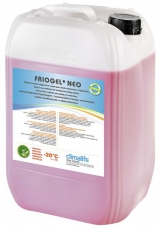 FRIOGEL® NEO; a concentrated antifreeze based on Mono Propylene Glycol and corrosion inhibitors, is a heat transfer fluid for low temperature refrigeration systems and food industry.

When FRIOGEL® NEO is diluted in water, the resulting liquid cooling agent provides effective protection against freezing and gives re-enforced protection against metal corrosion in the various ancient and new types of circuits (steel, aluminium, copper, brass, soldering, etc.). This protection has been confirmed by numerous static and dynamic heat tests.

The anti-corrosion inhibition technology used in FRIOGEL® NEO is organic, based on neutralised carboxylic acids, without phosphates, nitrites or amines. These anti-corrosion agents provide a long lasting protection.

The FRIOGEL® NEO formula is authorised by the General Directorate of Health, in compliance with the advice from ANSES (formerly AFSSA, the French Agency for Food Sanitary Security), as a heat transfer fluid for thermal exchange in single exchange domestic water production systems, up to a maximum concentration of 60% in volume.

Its exclusive formula ensures excellent hard water stability without risking precipitation of inhibition systems. However, the use of demineralised water for dilution is recommended to avoid scale.

On the other hand, the stability of the inhibition formula considerably reduces deposits caused by corrosion and alternation of the chemical compositions.

In order to avoid clogging, it is advisable to verify the FRIOGEL® NEO concentration on the occasion of maintenance operations (at least once a year).

RESIDENTIAL AND TERTIARY The supply and charging of 136,000 litres of glycol for an iced water production aggregate

Desoxyclean, is a detergent for professional use and replaces Desoxydant P.  It is designed to clean and remove surface corrosion, scale and sludge from pipes in heat transfer circuits or water pipes.

DUONETT® D7 is a descaling liquid for industrial use, intended for removing limescale and limestone, and eliminating sludge and rust deposits from water pipes.

Cleans circuits after pollution, non-encrusted contamination or refrigeration circuits prior to changing the heat transfer fluid.

This universal pump can be used for coolants, lubricants and our internal cleaning products.