More than 480 kg of R-455A fluid supplies 16 condensing units to meet the refrigeration needs of the new Feihl bakery based in Neumarkt, Germany: technological and environmental excellence !

Founded in 1895 by master baker Feihl in Pölling, the family business « Der Bäcker Feihl » employs 250 people between production, logistics and marketing of its products in 33 shops in the Neumarkt and Nuremberg region.

The love of craftsmanship and the in-depth knowledge of their fellow workers and master bakers make it possible to offer customers high quality gourmet products. 90% of these products are manufactured in their own shops.

More than 20 varieties of bread are available as well as a selection of pastries such as the famous sweet pastry from the Danube.

IceCool International BV was founded in 2008 in Hückelhoven, Germany, and then established in Echt, the Netherlands, a few years later. Today, IceCool International BV is the world leader in bakery equipment for the cooling and freezing of unpackaged dough. IceCool has built its reputation with the world's best bakers by constantly innovating to improve the quality of its products.

From 2012, the manufacturer IceCool changed course in response to F-Gas and integrated the following three criteria to select the most ecological refrigerant :

The first R-1234ze / CO2 cascade refrigeration system was created in 2013 for the Maurer bakery and was funded by the German government agency (BAFA*) because of its low environmental impact.

In 2015, the development of Honeywell's Solstice® L40X fluid was of particular interest to Peter Wehrens for future freezing installations.

When Feihl Bakery decided, in 2016, to build a new facility in Neumarkt to expand their production site, it turned to IceCool to develop and install an eco-efficient refrigeration system. Several alternatives were presented to the customer.
Feihl very quickly decided to use a Solstice® L40X system, whose installation and operating costs are lower than CO2 solutions. The excellent thermodynamic characteristics of this new, very low GWP refrigerant, and the proposed technology, were in perfect harmony with their specifications.

Due to the A2L (low ﬂammability) classification of R-455A, IceCool was in contact with local authorities and worked closely with the certification body TÜV and Energie Consult Holland to carry out the project and meet the requirements of the regulations in force.

Ultimately, IceCool recommended a system with 16 independent condensing units installed outside the building with a total cooling capacity of 320 kW, which limits the risks. 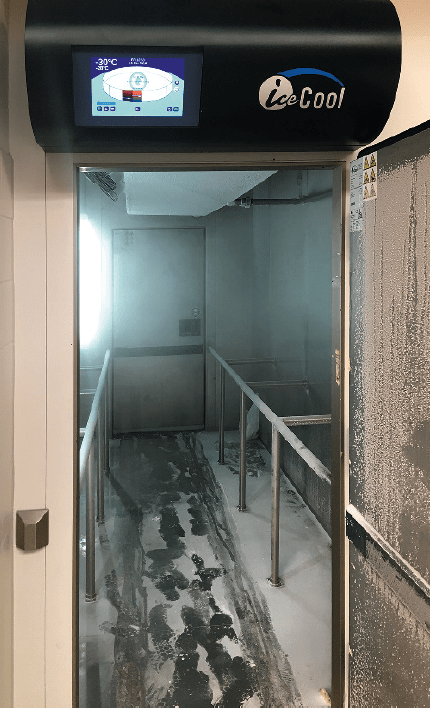 The installation is equipped with evaporators and condensers specially selected by the manufacturer Güntner, which allows for the temperature glide of R-455A to be managed without any difficulty. The cooling process ensures the dough rises within 24 hours. This process is carried out at a temperature of +/-0°C and is fully automated.
Der Backer Feihl is known on the market for its unique production process and low gluten content in all its breads.

The choice of R-455A has the added advantage of reducing the number of leakage tests to once a year for both freezers and is not necessary for other refrigeration installations with a charge of less than 5 CO2 tonne equivalent.

Six months after commissioning, the installation is working perfectly, and all stakeholders are satisfied with the result and warmly thank Climalife and Honeywell for their support throughout this project.

With a GWP of 148, R-455A meets the requirements of F-Gas and oﬀers a long-term solution for new installations. Its low ﬂammability, high energy efficiency, high critical temperature and low critical pressure are significant advantages for freezing and refrigeration applications.

« In 2018, we completed several projects with R-455A and chose to use this ﬂuid, next to the «natural», refrigerants, the standard for future installations based on lower energy consumption and end customer satisfaction » says Peter Wehrens.