In the heart of the Iberian Peninsula, a logistics hub becomes the biggest facility to be refrigerated with Solstice® L40X

GIPAT, based in Galicia, opts for 800 kg of R-455A, an eco-efficient solution, for the new Olano Group platform.

On the road leading to the Olano Group’s new logistics hub, a sign reads « Pinto - the geographic centre of the peninsula ». This is the strategic location chosen by the carrier for its hub, a little over 20 years ago.

With an average of three million tonnes of foodstuffs transported by almost 1,000 vehicles per year and 50 logistics centres spread across Europe, the Olano Group can rightfully claim to be a leader in the logistics of fresh goods: its seafood branch alone transports more than 350,000 tonnes of goods every year.

The carrier has been planning to expand its hubs for several years. In May 2020, the Technical Department in France launched a project for the installation of new cold rooms and turned to GIPAT, a company based in Galicia with which it had previously worked.

« The new head office in Madrid is at the centre of all the operations of the Olano network. We needed a new and larger hub to serve the 20 that we have throughout the peninsula. Thanks to this project, we hope to grow by an additional 44 tonnes of freight in 2021 », says Jose Godino, Director of Olano Group Madrid.

The project envisages that the hub provides a 24-hour operation, 365 days of the year with daily productivity peaks, not to mention the management of the peak seasons.

Every day, about 100 HGVs load and offload goods at one of the hub’s 25 bays.

The current facilities consist of two cold rooms (3,750 m3 and 2,000 m3) for the storage and preservation of products during loading operations: « Some trucks come in and then leave straight away while others may stay for a few hours. Foodstuffs have to be kept at a controlled temperature at our hub throughout this period of time », explains Jose Godino.

Alejandro Arias, GIPAT engineer and director, had to put forward a solution that met the Group’s four main requirements: refrigerating a new goods bay of more than 14,000 m3 at temperatures between 0° C and +6 °C (in addition to the two existing cold rooms), a reasonable investment cost with good efficiency, hot gas defrosting, and the use of a refrigerant with a low environmental impact.

In order to best meet his client’s specifications, the installer consulted Tomas Méndez, the General Director of the equipment manufacturer, Anfrigal.

Solstice® L40X stands out from the crowd

Following a technical presentation on the refrigerants distributed by Climalife, Anfrigal suggested Solstice® L40X. After studying the characteristics of R-455A, the installer was convinced for several reasons :

• Its great performance.
• A long-term solution with a GWP of 146.
• Its low environmental impact and, therefore, an exemption from the Spanish tax, IGFEI.
• The classification of the premises and the location of the system are not subject to charge limits (according to IF-04*).

In addition, R-455A is an alternative to ammonia, which was previously used in other Olano facilities.

The director of GIPAT, an ammonia expert, explains : « Ammonia is not suitable given this project’s specifications. Even if the freezing installations usually use NH₃, the performance of R-455A is just as effective, if not better. ».

Especially as the leak of a gas as toxic as ammonia at this hub could have dramatic consequences.

The refrigeration system was installed in just two months. Alejandro Arias is delighted : « We met all the deadlines. I purchased the refrigerant and most of the equipment from Anfrigal; the installation was pre-assembled in Galicia and the pipework in Madrid. Everything went smoothly as it was A2L refrigerant ».

Description of the installation : 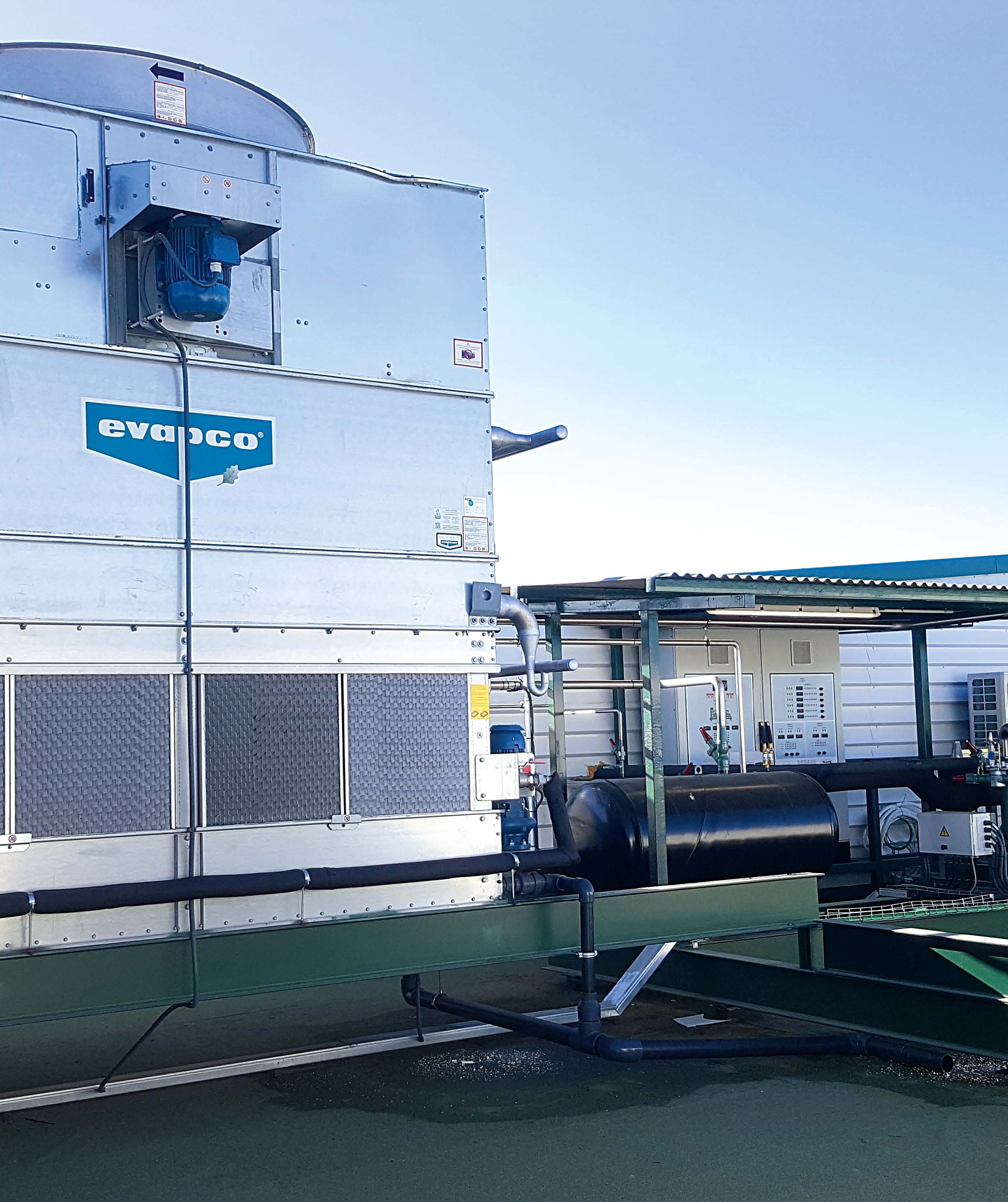 With regard to the safety measures required under RSIF** for A2L, GIPAT, which usually works with ammonia (classified B for its toxicity and subject to far more restrictive measures), did not come across any  problems.

Potential obstacles were brilliantly overcome: whether it was the supply of A2L-approved components or the adjustment of computer settings to take into account the glide of R-455A at the evaporator : « As the software program was not set for this refrigerant, I asked EVAPCO to send us the correction factors. The glide settings are very similar to those of R-407C. In addition, we are developing counter-current evaporators and we have not had any frosting problems », notes the engineer.

" The efficiency of Solstice® L40X proved to be unbeatable with low installation and maintenance costs. I would recommend it for systems of a certain volume, even for deep freezing, as it is more than enough. Not everyone can afford an indirect ammonia-based system. New and promising avenues are opening up with R-455A ", concludes Alejandro Arias, Director of GIPAT.

*Complementary technical instructions IF-04 of RSIF, « Use of different refrigerants ».

Focus on the distributor & manufacturer, Anfrigal 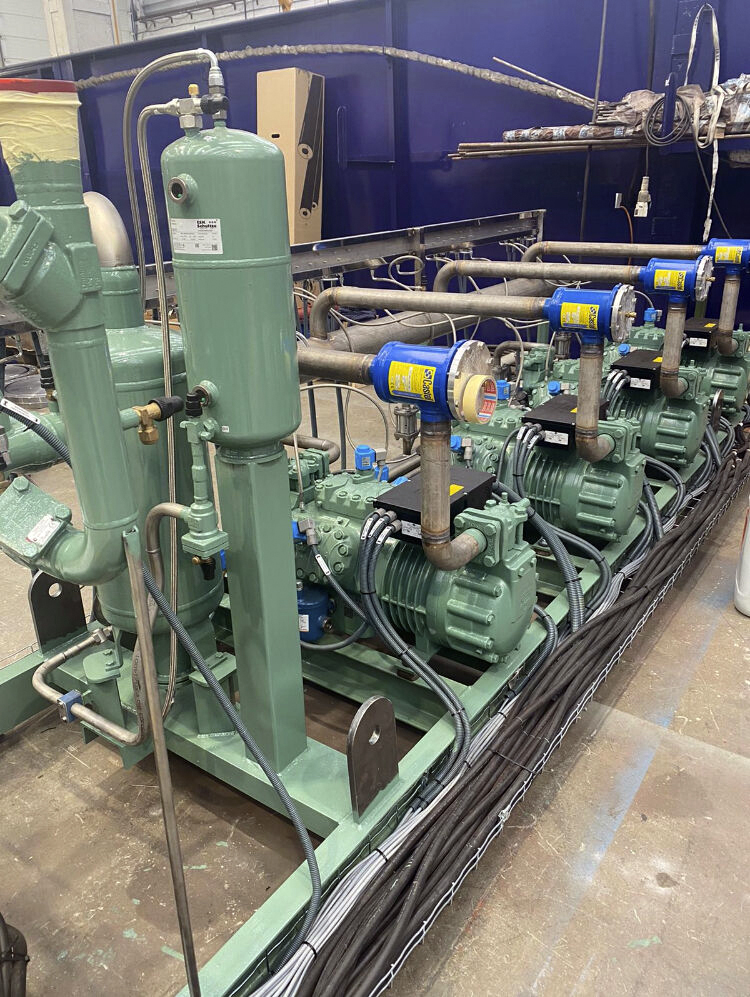 Anfrigal offers a range of condensing units and systems as well as refrigeration units with hermetic or semi-hermetic compressors.

The components are imported, assembled and then approved in Vigo, which enables the manufacturer to adapt its offer to the specific needs of its clients.

With 30 years’ experience in the sale of refrigeration equipment, Tomas Méndez has chosen R-455A as his preferred refrigerant to expand his business in equipment manufacturing « It complies with all of the current regulations and it is as easy to use as an A1 refrigerant. An installation that uses an A2L represents a saving of 60% to 70% compared with CO2 ».

R-455A is a blessing for the manufacturer, which is supplying equipment to more and more clients that wish to adopt new refrigerants that are more environmentally sustainable and more energy efficient. Anfrigal has already completed more than 15 installations with this refrigerant including: freezer rooms, chillers, ice machines and even commercial refrigeration systems for convenience stores and supermarkets. Whether above-zero or below-zero, R-455A is the perfect solution. 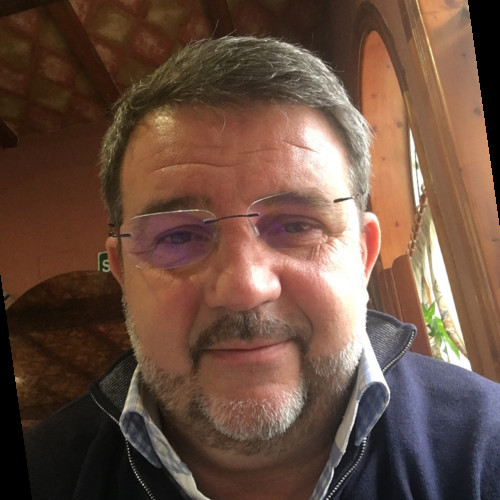 « It is already clear that the potential of this A2L refrigerant is enormous. I believe that within two to three years, 70% of the refrigeration market will only work with refrigerants like Solstice® L40X. I am convinced that as soon as installers recognise the reliability of a mildly flammable gas, they will adopt it. It is not subject to the Spanish tax, IGFEI, and it is easier to use than CO2 ».