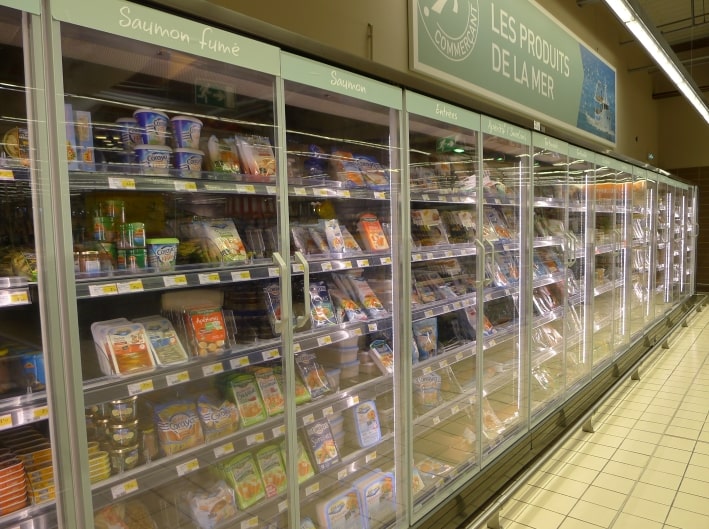 In an effort to limit the use of high GWP ﬂuids and to keep its customers' refrigeration installations running, Froid Climatisation Technique (FCT), based in Velaux in Bouches-du-Rhône, France, chose to replace R-404A in existing direct expansion refrigeration production units with Solstice® N40 (R-448A).

That is why the Intermarché store at Saint-Gély, on the outskirts of Montpellier, decided to entrust the conversion of its R-404A-based refrigeration systems to FCT; a specialist in refrigeration and energy management.
The 3,600 m2 store uses medium and low temperature equipment, among other things, to cover refrigeration needs for its fresh and frozen products.
FCT is very conscious of regulatory constraints and market developments so when it took charge of installation maintenance, it recommended its customer switched to a ﬂuid with a lower GWP. R-404A availability issues in late 2017 bolstered their determination to retrofit existing installations as soon as possible with a ﬂuid that was easy and quick to use.
Corentin Bonnec, Director of the FCT agency in Vendargues has proven expertise in retrofit management and in the use of Solstice® N40, having carried out several conversions from R-404A to R-448A, and was able to reassure and guide Mr. Grégory Lopez, Manager at the Intermarché store at Saint Gély, on the retrofit of these installations.

A misting system for the exchangers 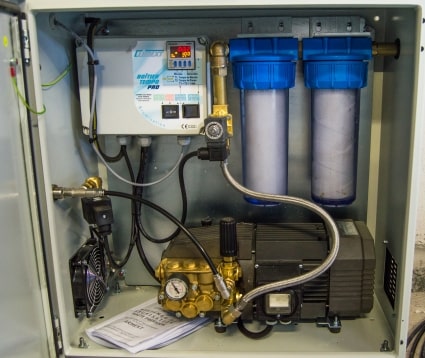 After a study of the installation, Mr. Bonnec concluded that the conversion was feasible. He did, however, note that the exchangers were already undersized and might not be capable of optimal performance.  To overcome this constraint and in order to retain the existing equipment, FCT devised and installed a misting system that is activated as soon as the outside temperature exceeds 37°C.

To avoid limescale deposits on the condenser fans and clogging of the nozzles, the misting circuit is equipped with a water softener that stabilises water hardness at 7. 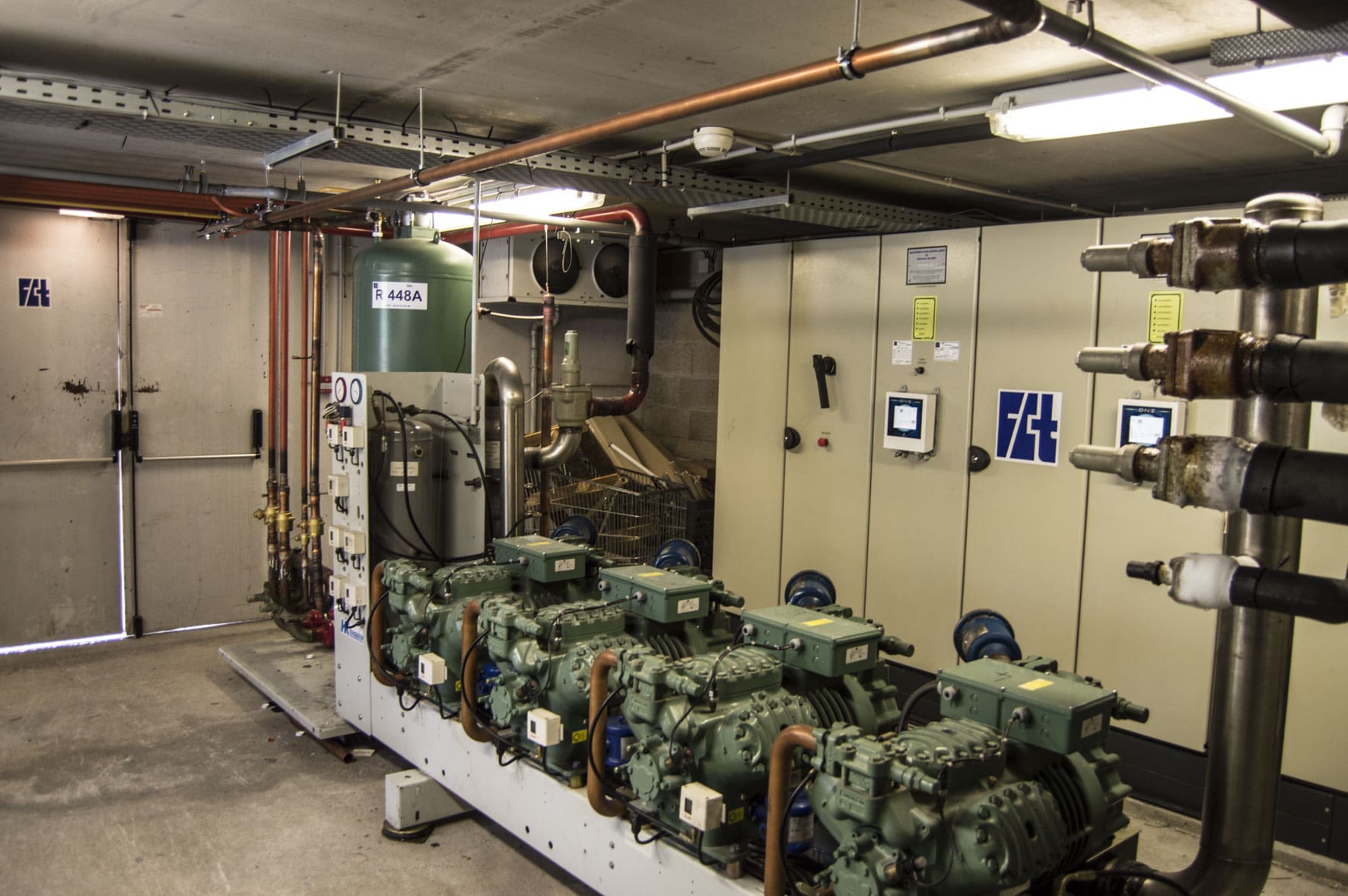 Guillaume Allard, FCT Business Manager, planned the operation carefully over two nights (one night per plant), so that it could be carried out without any need to close the store.
The job required a team of two technicians per night, plus appropriate site preparation.
The cabinets did not need to be emptied and the temperature of the units was maintained using blocks of dry ice which were put in place as soon as the store closed.

The medium temperature cooling unit with four Bitzer compressors was dealt with frst. With the use of Climalife packaging equipped with dual-phase valves, push-pull recovery optimised recovery time. The circuit was then filled with R-448A ﬂuid before being restarted.
The following day the low temperature unit was converted. It also had four Bitzer compressors and the same procedure was followed.
FCT is very used to this type of job; it is one of their particular areas of expertise. The overall operation went very smoothly. 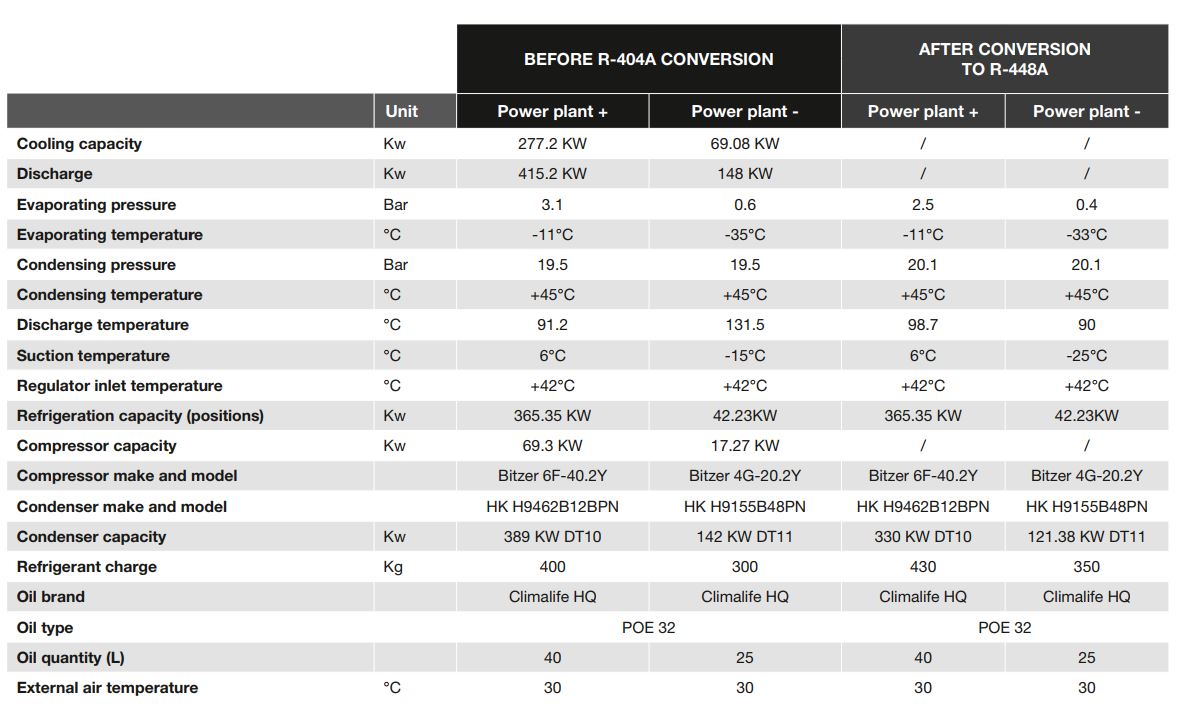 Solstice® N40 (R-448A) meets this legislative requirement with a GWP of 1,387. Its thermodynamic characteristics make conversion of R-404A / R-507A installations simple and also improve the energy efficiency of the systems. More than 10,000 conversions have been successfully carried out worldwide.

« We aim to support our customers with a trustworthy, environmental process, at the best possible price and as sustainable as possible » Corentin Bonnec, branch manager at FCT.

Corentin Bonnec & Guillaume Allard confirmed that they « didn't encounter any particular difficulty during the R-448A retrofit ». The settings of the installation's Danfoss control system were configured to suite the new fluid. « The setpoints were taken into account but they were based on the average temperature to compensate for the Solstice® N40's glide » explained Mr Bonnec.