Performax LT: feedback on the implementation of this new fluid 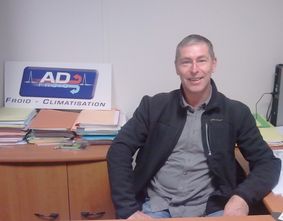 Interview with Mr Franck Egault, After Sales Manager of AD FROID, situated in Pacé (35) which specialises in commercial refrigeration and semi-industrial refrigeration (13 employees at the Rennes and Lorient sites).

How did you find out about Performax LT?
I was introduced to this new refrigerant fluid by David Fichant, the sales manager of Climalife. One of my colleagues who is an installer had also talked to me about it, having used it himself in an installation. I had recalled that it was easy to handle, in particular for R-22 retrofits.

What made you decide to try Perfomax LT?
In an emergency situation, with a leak in a GMS installation with R-408A, we didn't have time to change the pressure regulators, that would have led to a loss of food stocks (conservation of frozen products). The other argument was that reconverting to R-404A would have been more costly, precisely because of the change of components: pressure regulators and tubing, which it might not have been possible to adapt to R-404A. On the recommendation of Climalife's technical support, we reconverted the installation to Performax LT.

What was your first achievement with Performax LT?
It was the negative cold storage installation referred to earlier. It supplied the store's frozen food display cases. The particular feature of this installation lies in the fact that the condensers are only accessible by cradle. The total duration of the operation was 4 hours and involved 2 people. The load with Performax, 80 kilos, is slightly lower than the initial load with R-408A.

Did you encounter any particular difficulties with this first installation?
There were no difficulties, we closed the pressure regulators and made an adjustment to the overheating.

Have you carried out any other installations with Performax LT?

Yes, we have carried out some other GMS reconversions, on positive and negative plants

In terms of leak detection, did you notice any difference?

Yes, Performax LT can be detected better than R-404A, the leaks are easier to locate.

After these implementations, what are the main arguments for Performax LT in your opinion?
The GWP of 1824 (compared to 3922 for R-404A) is a real argument in favour, it's easy and fast to implement in retrofit situations, which is particularly useful when it comes to food storage problems.

Will you continue to recommend Performax LT to your clients?
Yes! I will emphasise its lower impact on the greenhouse effect, the ease of detection which is also advantageous in terms of cost to the client because leaks are no laughing matter, not to mention the savings in energy consumption with low temperature installations.