“...we found that SolRnett had completely neutralised the degraded glycol, it wasn’t even sticky to touch!”

Background: Griffiths Air Conditioning has been in business since 1999 focusing on Air Conditioning and heat pumps.  In more recent years they have specialised in the renewables market, installing Solar panels (PV and Thermal) and Heat Pumps (Air and Ground Source).

The Customer: Sir Robert McAlpine, an existing commercial customer for air conditioning, spoke to one of the Griffiths engineers about a Solar Thermal system on a private house which had been experiencing some problems.  Griffiths were asked to have a look at the problem.

The system: Upon investigation the engineer found that there had been degradation to the fluid originally used in the system (MPG based), which appeared like a sticky tar like residue. This type of problem can sometimes occur when a building is left empty and the system continues to receive energy from the sun. With no outlet for the heat, the system shuts the pump down and slowly heat builds up in the fluid to a point where it degrades. In this particular system it was later found that the purge pump used on installing this equipment had been insufficient and the fluid had stagnated due to air pockets. This had caused the pump to be ineffective. Until recently the only solution to systems with this type of problem has been to completely replace the panels and other system parts – a costly exercise.

The product had a dramatic effect cleaning the system, enabling them to re-charge with fresh fluid using a suitable purge pump to ensure that no air locks were contained in the system. 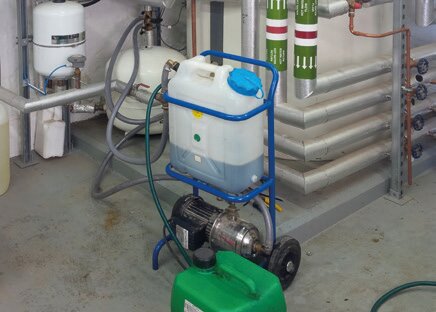 Matt Young explained: "SolRnett was very easy to use, we first flushed with water, which came back clear, not moving any of the residue, we then followed the SolRnett product data sheet and as soon as it was added to the water the solution turned black, so we knew it was working really well. We left the solution circulating for approximately 1 hour and when the system was drained we found that SolRnett had completely neutralised the degraded glycol, it wasn’t even sticky to touch!”

SolRnett  has been formulated by Climalife to clean Solar Thermal systems where the fluid used has degraded or caramelised. It can remove tarry deposits and return a system to use, quickly and very cost effectively. The product is readily available from Climalife.

Conclusion: “We would definitely use SolRnett  again in similar circumstances. We would also use the Greenway Fluid as it can operate to higher temperatures, with less likelihood of degradation on this scale, it wasn’t used on this occasion as the end user had already purchased other product.”

John Westerman at Climalife UK commented: “Solar Thermal systems are becoming increasingly popular but can sometimes suffer from blockages caused by the premature degradation of a heat transfer fluid. This case study demonstrates the excellent performance capability of Climalife’s SolRnett  cleaner that can create a sound basis on which to load the system with a good quality heat transfer fluid.”