R-448A enables the chain to respond to the dual challenge set by the government: to reduce both its electricity consumption and its environmental impact R-448A.

In 2018, the distributor Chien Torn Technology Co Ltd, based in Taipei, organised a conference in collaboration with Climalife, on the new HFC/HFO refrigerants.

The new safe, effective and sustainable solutions presented at this event were of particular interest to commercial refrigeration supervisors. After having communicated and evaluated all factors, the Surewell supermarket chain, with the support and assistance of Climalife and Panasonic, decided to test R-448A as part of construction of a new production unit making bread and pastry. Everything is being done to respond to the challenges faced across the retail and distribution sector, as a result of the country’s electricity tax.

Reducing energy consumption: A vital challenge for this Pacific island

Over the past few years, electricity has been in short supply in Taiwan. As demand is set to grow in the near future, the Yuan government has imposed a 5% reduction in electricity consumption among users of more than 1,000 kW. If this target is not met, additional costs are applied to tariffs. Aware of the fact that, on average, refrigeration equipment accounts for 50% of the electricity used by supermarkets, Surewell is committed to reducing its energy costs.

Established in 1992, the company is based in Yilan, to the north-east of Taipei, and currently runs 19 supermarkets. The chain is very well known locally due to its strong, long-standing presence as well as its opening hours, with stores often open for full 24-hour cycles.

Surewell takes full advantage of its location to sell and introduce food products made with local ingredients. The Lanyang plain, in particular, is the country's breadbasket. Drawing on this wealth, Surewell specialises in the production of home-made bread and pastries, and sells traditional and innovative bakery products under its “The King Bakery” brand. For its new production unit, which covers a surface area of 315 m², Panasonic intends to replace the current refrigerant, R-404A, with R-448A, on the sound advice of its refrigerant distributor Chien Torn Technology.

This latest-generation refrigerant, developed by the producer Honeywell and mainly used in Europe due to its low GWP, enables the client’s goal to be met while also reducing its carbon emissions. The refrigerant’s better performance coefficient at low and medium temperatures has won over the various firms involved in the project. R-448A has been approved and implemented in the new installation for which R-404A was initially intended. 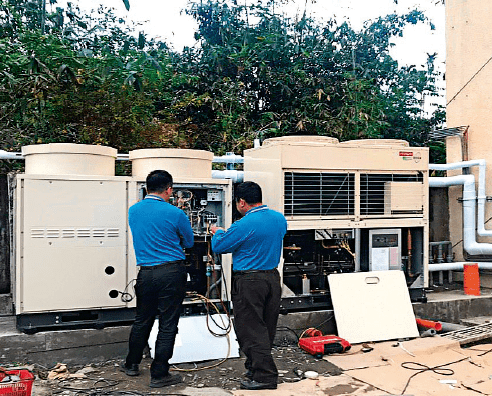 Run Yi Co. Ltd, a company that specialises in commercial refrigeration and that has over 20 years’ experience in the supermarket sector, was entrusted with installing the chosen refrigeration equipment. A total of three Hitachi units were installed in early January: one unit supplies above-zero cooling to the storage room, while the other two refrigerate the freezing room and the bread and pastry production area respectively.

As noted by the installer, « the R-448A filling process was carried out without any problems; technicians who have experience with this application remarked that the desired operating temperature was reached more quickly than with R-404A. Once the goods had been stored, we made a few adjustments to optimise the system. Having monitored the system for a few months, we can say that Solstice® N40 has a bright future both as a retrofit solution and in new installations, and greatly improves energy efficiency ».

« Panasonic is committed to offering sustainable solutions to its clients. With the R-448A refrigerant, put forward by Chien Torn Technology, Climalife's refrigerant distributor in Taiwan, there is no doubt that the energy efficiency is better than with R-404A ».

« As a supermarket chain, we strive on a daily basis to work in a way that respects the environment. It is important that we are supported by professionals who understand the challenges we face. We have very much appreciated working with all of the partners for this project, and they have given us all of the information that we need on this new refrigerant. The bottom line is that Surewell has made energy savings and reduced its carbon footprint: it's a winwin situation. In light of this great achievement, Surewell will continue to modernise its old systems with R-448A ».