the 20th anniversary of the ‘Voiles du Froid’ sailing event: a successful change of tack! 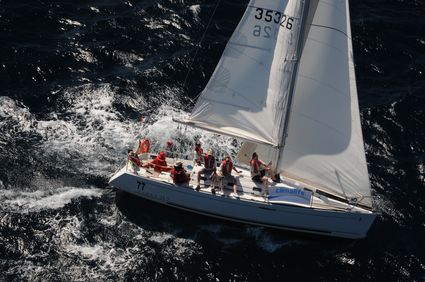 To celebrate its 20th anniversary, the Voiles du Froid changed course in the direction of the Iles d'Or situated in the heart of the Mediterranean! A great success!

230 professionals from the cooling and air conditioning sector from all over Europe met together from the 7th to 10th June to share this enjoyable sporting event which will leave them with happy memories.

Most of them, accustomed to navigating in the waters of Brittany, discovered the big blue Mediterranean for the first time, apparently so calm but capable of springing some nasty surprises...

Having arrived at the port of Hyères late in the afternoon, the 25 teams settled themselves onboard their monohulls before getting further acquainted and meeting old friends at the evening event to experience local specialities. Each participant had an opportunity to enjoy dishes and traditions from the French regions as well as all four corners of Europe...

On Friday at 10 o'clock on the dot, despite the moderate wind conditions announced for the morning, when our sailors took to the sea in their First 31.7s they actually experienced quite testing sailing conditions with very changeable weather which set the pace for the two windward leeward courses sponsored by HRS and GEA and the ExxonMobil coastal course, before reaching the magnificent and carefully preserved island of Porquerolles.

On Saturday morning, our valiant sailors put out to sea again under the keen eye of a passing photographer, perched in a helicopter, who captured this fleeting moment. The strong gusts of wind they had to learn how to contend with, created some rather unusual surprises during the Honeywell and Snefcca regattas, with a strong impact on the general ranking.

After all that effort, it was back to the turquoise water and the white sands...

In the afternoon, the teams disembarked on Notre-Dame beach where a picnic was organised, before cheerfully competing with each other in the Assurfroid Olympiads. This exciting day ended late in the night with a lively Climalife reception in the heart of the La Courtade wine estate.

First thing in the morning, everyone was back at the helm with a bright smile for the last Climalife regatta which took the sailors back to the port of Hyères. The Bordeaux 3 team, who had been up in the top rankings in previous years, won the title from the ‘Marseille 1' boat by the skin of their teeth. Their victory was celebrated at a final cocktail party facing the sea and will mark this exceptional 20th edition of the ‘Voiles du Froid' sailing event.

We would like to extend our warmest thanks to our partners Honeywell, Le Snefcca, Assurfroid, HRS, ExxonMobil, Eurovent, ITE, PYC Edition and GEA as well as the participants who contributed to the success of this thrilling event.