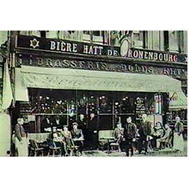 The story of the Dehon Group is first and foremost a story of Cooling systems, currently represented by our Climalife entity.

In 1874, for the first time in Europe, a firm that specialised in the distribution of chemical products for the embryonic refrigeration industry was created: Maison Joseph Peintre of Verviers (Belgium). It offered the refrigerants of its time as well as alkalis, calcium chloride (brines) and unfreezable oils.

In 1935, Etablissements Joseph Peintre, again in the forefront, was the first to import a new gas into Europe called Dichlorodifluoromethane (R-12). This new expansion took place under the drive of M. O. DEHON (1895-1955), who succeeded M. J. PEINTRE in 1931, and that of his three sons who continued his work within the companies of the Dehon family group.

After the Second World War, the concept of controlled temperature became fundamental and actively participated in the development of the refrigeration industry.
The commercial, industrial and domestic refrigeration market literally took off: introduction of deep-freezing, freeze-drying, air conditioning and climatic engineering.
This broadening of application scope of refrigeration required efficient refrigerants suited to the temperature required: new molecules were developed such as R-11 and R-113 for centrifugal compressor units, R-22 for low temperatures and air conditioning, R-502 for deep-freezing and R-13 for freeze-drying.
At the same time, our first refrigerant packaging station was built at Marseille in 1952, with a second installed at Bry sur Marne in 1959.

The gas decanting and packaging process was accelerated during this period particularly in the aerosol sector where the chlorofluorocarbon gas propellants - as for refrigeration - provided exceptional qualities.

From the start, the reputation of the Dehon Group has been built on the quality of the products offered and their immediate availability in diverse and innovative packaging. Refrigerants are the vital lead which has enabled the Group to access different customer bases and contributed to the diversification of our activities with the creation of different business entities from 1965.

In 2006, the Dehon Group created the Climalife brand to centralise the refrigeration, air conditioning and heating activities and to offer its products and services around the world using an international distribution network.

In 2014, our industry is again confronted by new developments (for example the end of HCFCs, the introduction of the new F-Gas regulations, etc.) but the experience acquired for 140 years enables the Dehon Group to remain by our clients side.

Our philosophy remains one of understanding customer needs and developing new solutions. Our business and technological performance has seen growth through an optimisation strategy driven by the new F-Gas regulations which apply from the 1st January 2015 and in particular by the development of a new collaborative communication tool: a mobile app called « F-Gas solutions ».