The environment - a key consideration at Givors Carrefour hypermarket in France 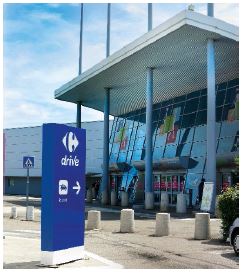 In order to anticipate the consequences of the F-Gas regulation and to reduce its carbon footprint, the hypermarket installed a DNI smart-level leak detection system, and retrofitted its R-404A refrigeration system to run on R-448A.

The Carrefour "2 vallées" hypermarket in Givors, France, opened 40 years ago and is one of the Group's three largest stores in the Lyon region. Remodelled in 2011 when Carrefour converted a number of its hypermarkets to Carrefour Planet stores to better meet its customers' needs, the hypermarket now has more than 400 employees and a surface area of 12,000 m². Its refrigerated display shelves and refrigeration units are powered by 3 central units designed to run on R-404A.

The objective of the quota reduction imposed by the 2014 European F-Gas II regulation to reduce the use of high-GWP ﬂuids, was to have a major impact on the availability of R-404A.  This is the context within which Carrefour; strongly committed to reducing the environmental impact of its activities, launched the initiative to equip its facilities with a DNI smart leak detection system so that they could be monitored in real time.
The Matelex DNI product uses indirect measuring methods to identify leaks – even small ones. Furthermore, it can be used to monitor a facility's energy performance and help reduce energy consumption with the help of energy and ﬂoating HP modules. 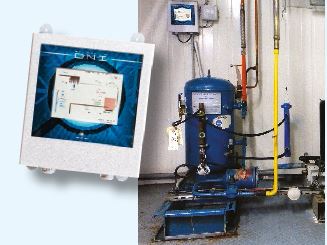 As soon as a leak is detected by the DNI, its details are sent via Sentinelle, an online management interface.
Cyril Coulange, the store manager, together with the Carrefour technical department now receives a warning with information about which central unit is affected, an estimate of the leakage rate, its value expressed as T of CO2 equivalent and the regulatory timeframe within which action has to be taken. Each of the three central units at the Givors hypermarket is now fitted with "statistical" alarms which are triggered in the event of abnormal levels and which vary from those at which the facility usually operates. Low-level alarms are also configured and can be triggered based on the quantities of refrigerant.  In the event of a leak, the maintenance company is immediately contacted so that they can take action as soon as possible. IFC, part of the Mondial Frigo group, conducts a weekly inspection of all the DNI installed at the Givors Carrefour.

A retrofit to make the facility last longer

As well as installing the DNI leak detection system, Carrefour decided to retrofit the central units at the Givors store which ran on R-404A (GWP = 3922) so they could run on R-448A (GWP = 1387).
The central unit for the chilled cold storage, made up of six semi-hermetic Bitzer 6F-40 compressors, was charged with 1300kg of R-404A refrigerant. The LT refrigeration is produced by a central unit made up of four compressors (350kg of R-404A), exactly the same as the ones used for chilled refrigeration.

The installation is supplemented by three ZP30 Copeland scroll compressors, which initially ran on R-404A, and which are used to power the proofing cabinet. For several years, Cyril Coulange, has entrusted Nicolas Charnay, agency work manager at IFC, with the facility's maintenance.

The facility was converted in February 2018. Since the retrofit required that the refrigeration facility be shut down, it was carried out during the night so as not to impact the store's trading.

A project of this type requires detailed planning – including the time needed to empty the shelves and discontinue deliveries of refrigerated and deep-frozen products, since the refrigeration units are required to store the contents of the shelves and cabinets.

To limit the preparation time, the shelves were not fully filled. Only products at the front of the shelves were kept.  Blocks of dry ice were placed in the cabinets so as to safely keep the temperature at the required levels.  To complete the retrofit, Nicolas Charnay made a few adjustments to the DNI to factor in the temperature glide of R-448A on the Danfoss temperature regulation system, which had previously been set for R-404A.

To increase his commitment to the environment and further reduce energy consumption, Cyril Coulange, told us that the lighting units had all been replaced with adjustable-intensity LEDs. For example, before the store opens they are set to 40%, just high enough for the hypermarket's employees to work comfortably without using too much electricity. This innovation has paid off – Mr Coulange estimates that it has generated a 15% reduction in electricity consumption.
Mr Charnay and Mr Coulange have worked closely together for a number of years now and are satisfied with how the store is being run which has helped reduce refrigerant leaks, and thus securing refrigeration production with the Climalife partnership.

Regenerating a refrigerant is a process designed to restore the properties and qualities of a recovered ﬂuid so that they are similar to those of the new ﬂuid. It differs from recycling insofar as the performance and quality of a recycled product cannot be guaranteed.  By regenerating the recovered products, the Carrefour group ensures that enough refrigerant is available to compensate for any unavailability resulting from the quotas imposed by the F-Gas ruling.

The operation was scheduled to take place in three phases, one for each of the three central units.  The first to be retrofitted was the chilled cold storage unit from which 1306 kg of R-404A was recovered and transferred to dedicated 930 L containers. The operation began at 3pm and required three technicians.  The facility was then charged with R-448A – IFC added an additional 7% in weight compared with the initial R-404A charge.  The frozen refrigeration installation was then converted, ending with the proofing cabinet. After the waste documentation was issued, the quantity recovered was sent to be refrigerated so it could be used for maintenance operations at stores still running on R-404A. The entire operation took one week.