The R-404A substitution train is already on its way. How do I manage the implementation of the new refrigerants and which solutions should I choose?

Could you explain to us briefly why you have developed a number of molecules over recent years?
JDB: Honeywell anticipated changes to the market and started research and development more than 15 years ago. The aim was to find molecules with the lowest possible GWP. Among the thousands of molecules assessed, only three were chosen as being the best compromise in terms of efficiency, safety and the environment. These three HFO molecules are R-1234yf, R-1234ze and R-1233zd. Their main aim is to replace R-134a in cars, liquid cooling systems (including centrifrugal chillers) and in heat pumps. These three pure low pressure and low capacity molecules, must be mixed with HFCs if we want to obtain so-called drop-in fluids for existing solutions.

Why have so many products appeared on the market?
JDB: All refrigerant producers are trying to find direct replacement solutions by creating blends, so each has created their own formula, all with temperature glides of varying degrees. There is a feeling of a proliferation of products on the mar­ket but we need to look at what is actually being marketed. There is a huge difference between research and what actually comes onto the mar­ket. If we take R-404A replacement solutions, i.e. non-flammable HFO/HFC mixes, there are only two solutions available currently including Solstice® N40 (R-448A) from Honeywell.

Why this new alternative when you have already launched Performax® LT as a replacement solution for R-404A?
JDB: Performax® LT (R-407F) is a very good product, it is the HFC with the lowest GWP and is the most efficient replacement for R-404A. The implementation of taxes on HFCs in some European countries (e.g. Spain) has led to a real economic need to develop a new mix with an even lower GWP. Solstice® N40 is the solution with the lowest GWP on the market (1387).

Besides the GWP of the fluid, are there technicaldifferences between R-407F/R-448A?

JDB: These two products differ by their composition and their GWP but are very close in terms of performance, capacity and energy efficiency. R-448A has the advantage of generating the lowest compressor discharge temperatures and usually makes it possible to eliminate liquid injection.

But in practical terms, is there a future for both these very similar fluids?
JDB : R-407F and R-448A can be used in all new commercial and industrial refrigeration systems without restriction, except from 1st January 2022 for so-called should be multi-pack or hermeticallysealed systems. In addition, it is important to underline that they have no maintenance prohibition date. Both products have a real future. Nowadays, choosing a product is based more on economical than technical grounds and depends on the end customer’s circumstances. R-407F has a better quality/price ratio when compared with R-404A, and with more than 15,000 supermarkets retrofitted around the world, it is a technical success. R-448A has a more environmental image with its lower GWP, 2000 supermarkets already use it.

How do we handle the implementation of these new fluids?
JDB: As I mentioned earlier, all new "drop-in" fluids have a temperature glide. This glide must be taken into account as it provides a significant efficiency gain to the system. It is necessary to look at each setting impacted by the glide, for example using average temperatures at the heat exchangers (condenser and evaporator), instead of the usual dew point with R-404A, consider the dew point for superheating and boiling point for sub cooling, etc. Then simply apply refrigeration good practice learnt in all good technical colleges.

The question of product distillation in the event of a leak is often mentioned, what is this?
JDB: This is an important theoretical ques­tion. In the absence of significant experimental research on the subject, Honeywell has carried out studies and produced publications which show that in the event of a 20 to 30% leak, the solution is simply to recharge with new product. The system then regains all its per­formance with regard to capacity. Retrofitting existing installations containing R-404A with these solutions is a very simple conversion pro­cess. R-407F and R-448A have been approved by compressor engineers and are listed in all equipment selection software produced by the major brands on the market.

JDB: The goal for Honeywell is to have a replacement for R-404A with a GWP less than 150 over the long term. Solstice® L40X (R-455A) was mainly developed to meet requirements for low-temperature herme­tically sealed systems, condensation units and built-in units. Indeed, the sealed piston compressor technology mostly used in this equipment has a major problem: they cannot cope with additional overheating at the com­pressor discharge which can impact service life. We therefore worked jointly with the manu­facturers to obtain a fluid with a capacity simi­lar to R-404A with a GWP of 148 and a very low discharge temperature. Solstice® L40X is almost non-flammable, classified A2L and is analogous to a "super propane". The other essential advantage over propane is that the charge of Solstice® L40X is approximately 12 times greater using the new EN378 standard, just published.

JDB: Nowadays, there are a number of inno­vations taking place at the same time with regard to refrigerants, compression techniques and system designs. To replace R-404A, we envisage Solstice® L40X also taking its place within new designs such as water loop systems in supermarkets with built-in units or so-called 3 in 1 systems already used for HFOs.

Returning to the flammability of this new fluid, can you explain why you consider it to be an almost non-flammable product?
JDB: Solstice® L40X (R-455A) contains 3% CO2. We have added it in order to increase the capacity of the fluid and reduce flammability. If we look at the flammability range, defined between the lower and upper flammability limits, there is a difference of only 1.1% (see blue curve on the attached chart). There is therefore little chance of ending up in this situation and if so, combustion in the air will take the mix out of the flammability zone very quickly. Generally speaking, we observe that the HFOs or A2L classified HFC/HFO blends have a tendency to protect the systems when compared with A3-classified hydrocarbons. Another example: a concentration 10 times greater and about 250,000 times more energy is needed to ignite R-1234ze relative to pro­pane. HFOs have a bright future! The R-404A substitution train is on its way - don't miss it. Climb on board now! 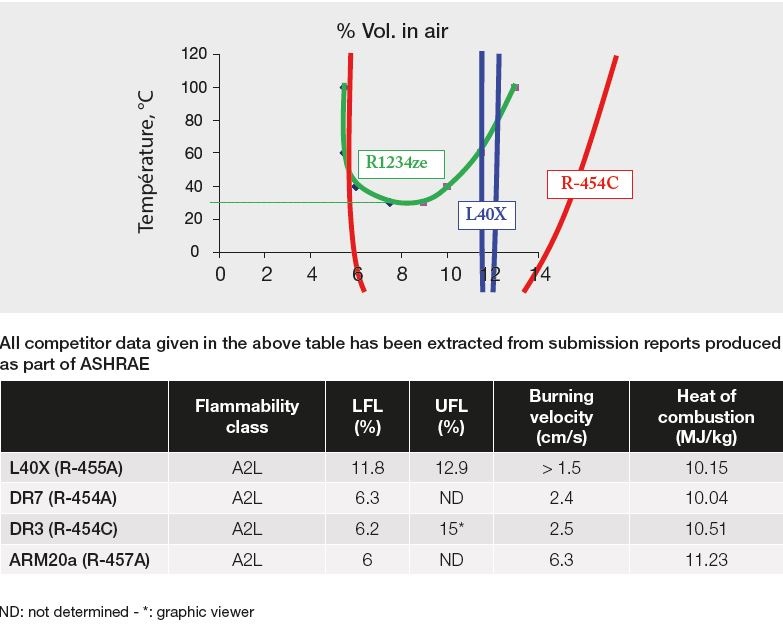