With Solstice® L40X, the Leclerc Express in Moissac optimises the total cost of ownership of its refrigeration system

Installation of R-455A condensing units to supply the cold rooms of this new convenience store.


"Choosing a refrigeration system is no easy task these days in order to optimise costs and have a reliable and durable system for preserving foodstuffs," explains Régis Plet, who is in charge of the works at the new Leclerc Express shop in Moissac.

Opening of a new E. Leclerc Express in the Tarn et Garonne

On 15 June, the urban commune of Moissac, which has more than 13,000 inhabitants, was delighted with the arrival of a new shop to replace Netto, a discount shop belonging to the Mousquetaires group.

It is the manager of the E. Leclerc hypermarket in Castelsarrazin, less than 10 kilometres from Moissac, who is taking over this business with a clearly defined objective: to offer a local service at low prices with quality products. 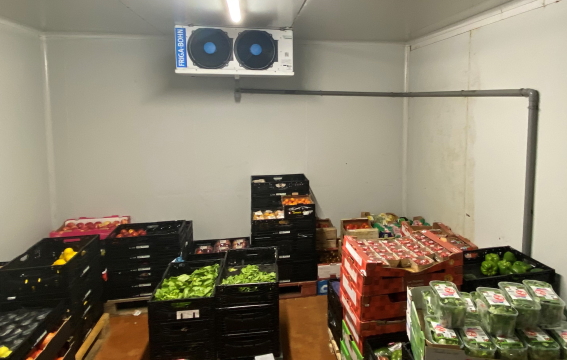 The 800 m² shop has been completely redesigned and refurbished to meet the brand’s criteria. It took more then four months for the revamp and reopening of the refrigeration facilities. Supported by a designer and an architect, the sales area was equipped with Costan branded refrigerated cabinets and display cases for greater flexibility. A meeting room was also built and the storeroom was transformed to hold products ordered online, offering consumers a "drive through" service. A new air-conditioning system was installed and a call for tenders was launched in parallel for a renovation of the refrigeration system in the cold rooms.

Eco-efficiency modelling confirms the choice of the new architecture and the Solstice® refrigerant L40X
As mentioned in the preamble, for an independent retailer, choosing a cooling system has become increasingly complex in the face of regulatory constraints, global warming and rising energy prices. Several solutions were considered, including a CO2 booster and Solstice® condensing units L40X.

The latter architecture was chosen for several reasons:

- Lower capital cost (CAPEX) compared to CO2
- Regulatory compliance with GWP below 150
- Higher efficiency over the lifetime of the installation (OPEX)
- Safety in use
- Reliability and refrigeration capacity of R-455A
- Reducing the environmental footprint. 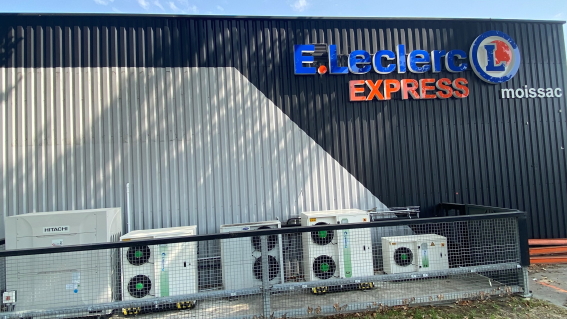 An existing Carrier unit in the previous Netto shop configuration
was reused to supply the chilled cold room for fresh products, equipped with a Profroid evaporator and charged with 5 kg of R-448A, thus reducing the investment cost.

The other three chambers were connected to new Pecomark condensing units running on R-455A and new Friga Bohn evaporators were installed. The total Solstice® L40X load was 18 kg.
Three months after its commission by the installer Quercy Réfrigération, the new refrigeration system is meeting expectations perfectly, even in ambient temperature conditions as seen this summer, with heat waves in France exceeding 40°C in this region.
As Benoît Duparc, manager of Quercy Réfrigération, points out, "R-455A is a refrigerant that is easy to use for all engineers and does not require as much knowledge as CO2. It is a simple installation with inexpensive components available anywhere when needed. At extreme temperatures, the COP remains good and the risk of loss of goods is minimised. There is no need to spray water on the condensers to avoid tripping.”

In conclusion, Regis Plet recalls his satisfaction at having opted for this type of architecture:  "Today, we are serene in the technological choice we have made. We have reduced our total cost of ownership compared to a CO2 system and this solution is fully in line with our environmental approach, which we strive to improve every day. The proximity of Quercy Réfrigération is also a key advantage in terms of rapid repair work if necessary.

Eco-efficiency simulation for the Leclerc Express in Moissac

Description of the systems compared by the eco-efficiency model validated by Cemafroid. 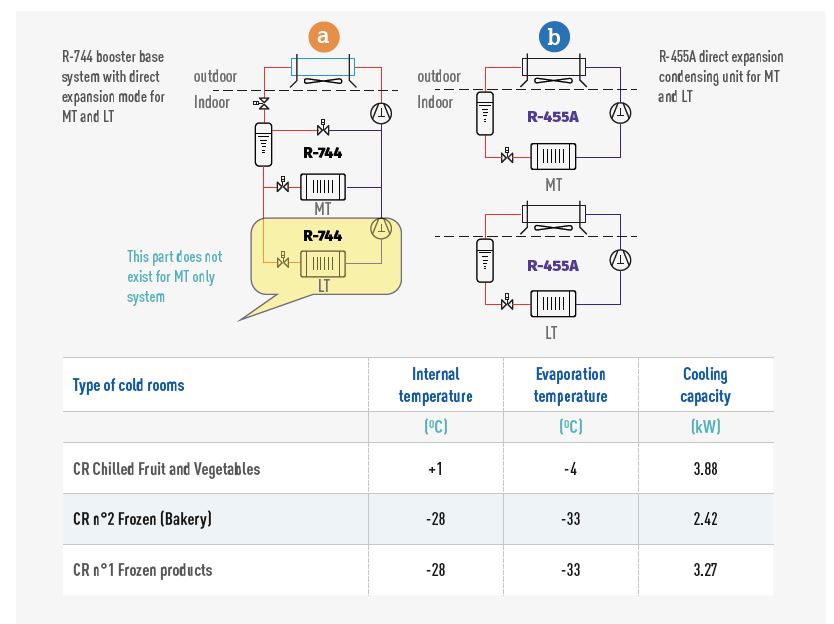 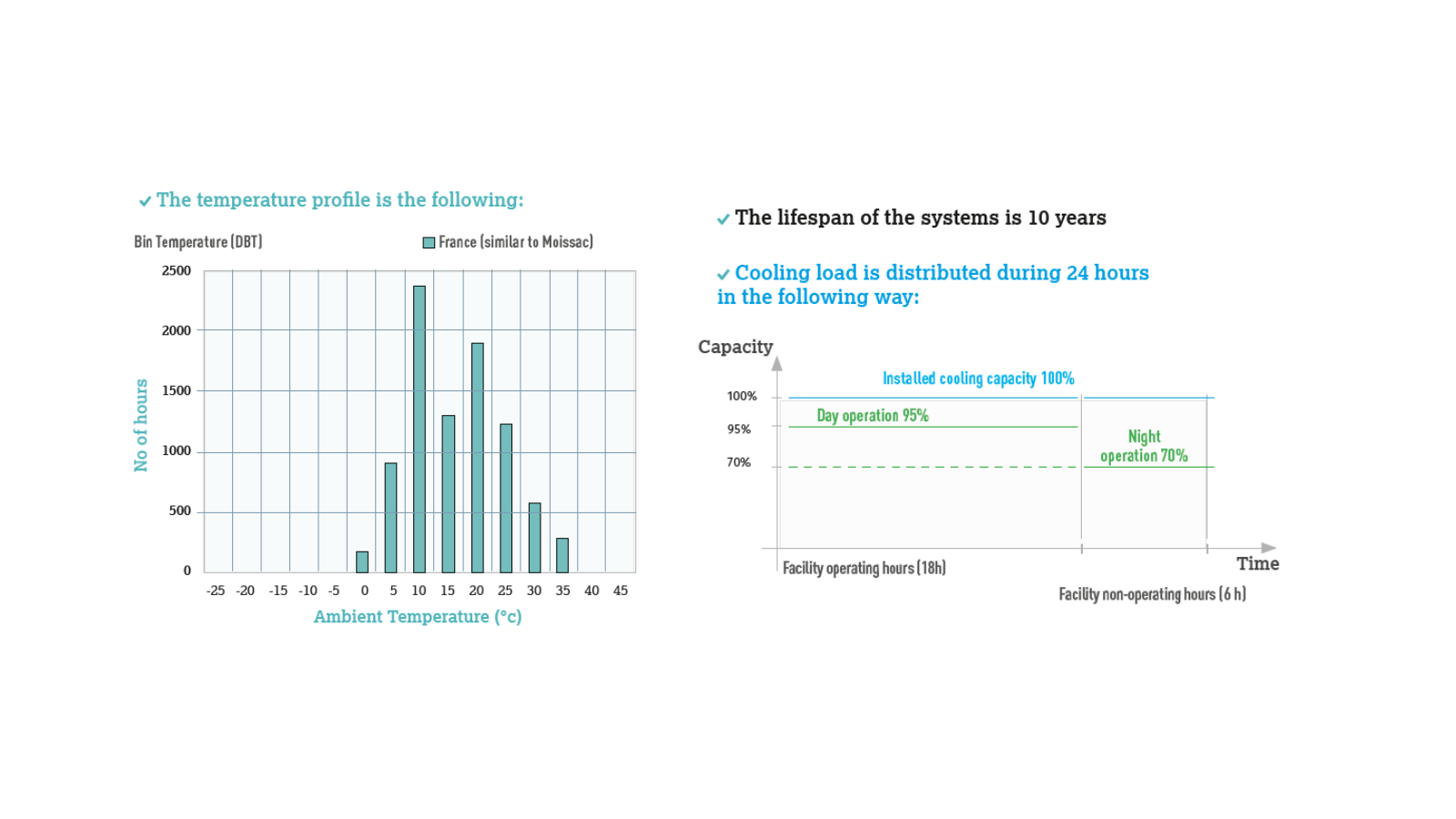 (*) energy efficiency 50 kW/kW, means that in the condenser / gas cooler 50 kW of heat is rejected with consumption of 1 kW of electricity by the fan.